Adele is making her millions on the backs of her ex-boyfriends who famously inspired her heartbroken songs, though she’s never named names. Would the British singer let someone write a song about her? Not if she can help it! 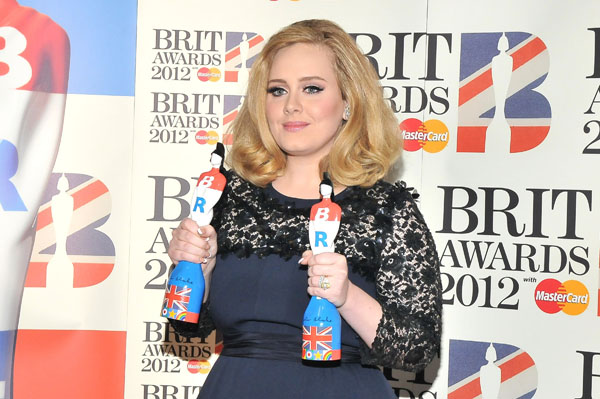 Adele is pretty private, but she let NBC’s Matt Lauer into her life for a new interview that aired on Sunday night — and we wish she’d talk more often. The girl is hilarious! The 23-year-old singer dished on everything from her 2012 Grammys “comeback” performance to how she knew she’d really make it.

The best part of the interview? When she admitted that she’d be embarrassed if one of her exes wrote a song about her (like she’s known to do).

Will Adele sing again for the next James Bond flick? >>

“I’d f****** s*** myself. I’d be mortified,” she laughed to Lauer, adding that it wouldn’t be the same because she’s never admitted who her songs are about. “But also if they wrote songs about me, they’d be: ‘This song’s about Adele’. I’ve never given any names ever, but everyone’s going to know this song’s about me. No one actually knows who my songs are about.”

Not that people haven’t tried to find her exes — but that’s a whole other story.

The strawberry blonde Brit added that she does have some regrets about her music, though.

“Yeah, it’s hard… I do wish I’d kept a lot of things to myself, but I never knew the album was going to be so big. I will be more wary when I go into things now,” she said of whether or not she’d “take back” some of her songs.

“It is really sad but it’s also to protect the people I love. I don’t see why my career and my lifestyle should affect people who it’s not their dream, it’s got nothing to do with them,” she added. “In the songs I can still be really, really direct but in interviews when I’m explaining my songs I shouldn’t be so direct about who they’re about.”

The “Someone Like You” singer also told Lauer that she knew she’d “made” it when Elton John phoned her.

“I had no idea who it was and he just started chatting away to me and I passed the phone over to a friend and I was like yeah, it’s Elton,” she remembered. “It still cracks me up. It made me think, my god, it’s another level now.”

Better get used to those kind of phone calls, Adele! Still, there’s one thing she’ll never get used to: Rumors about her private life.

“I don’t want to be a celebrity. I don’t want to be in people’s faces, you know, constantly on covers of magazine that I haven’t even known I’m on,” Adele admitted, adding that some of the most absurd rumors she’s heard. “I was adopting an Ethiopian child, that’s not true. My house was haunted, that wasn’t true. God, there’s been so many rumors.”

That doesn’t mean the soulful Londoner doesn’t have a sense of humor — she has a huge one.

“The other day I walked through Trafalgar Square, tourist haven. I was a bit worried and I was in my pajamas because I’d been working the day before, I was in color too, I’m always in black,” she remembered of her prank. “I had floral tracksuit bottoms on and this massive green coat and some little pink pumps. Luckily… I was really scared but I had this massive umbrella. Nobody recognized me. A couple looked ’round but they were like no, she’s in color and what would she be doing in Trafalgar Square on a Saturday in pajamas?”

Note to self: Watch for Adele in colorful jammies the next time we’re in London!