This season of Jersey Shore is going to be mega-boring: The cast went out for the first club night of the new season over the weekend — and they didn’t drink. Did they combust from lack of alcohol? 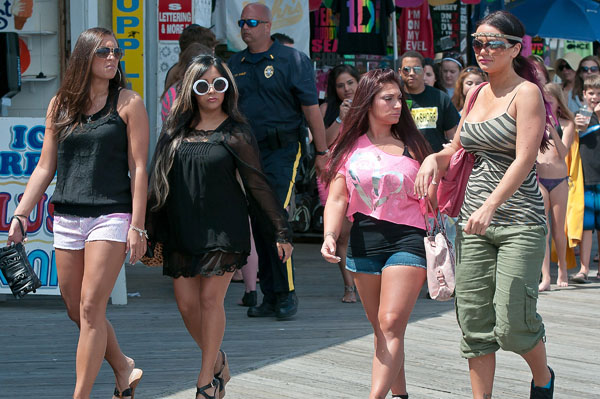 Will this season of Jersey Shore turn into a big ole snoozefest? Sounds like it, based on the cast’s activities during the first weekend back at the Shore house. Turns out that a rehabbed Situation and pregnant Snooki weren’t the only ones who stayed away from the booze — all of the cast sat quietly on a bar patio, according to TMZ.

Oh, and it was at the same bar where a douchey dude punched Snooki out during the show’s first season.

Now, we can’t fault the cast for not drinking — it’s nice to show solidarity with your recovering and pregnant pals. Still, what is the season going to be about? The show earned its huge ratings thanks to the cast’s drunken antics. The times they weren’t drinking were painfully boring — lots of sleeping and fighting between Sammi Sweetheart and Ronnie.

What now? We hope we’re pleasantly surprised, but we’re not so sure right now.

As for The Situation? Well, he successfully went to rehab for painkiller addiction, though many suspected it had more to do with cocaine and alcohol abuse.

“My addiction was prescription painkillers. At first, I’m sure I thought that it might give me energy. I thought it helped me, because it’s a painkiller so you’re not tired anymore,” he told MTV in May. “Then after a while you’re like ‘Oh maybe this is going to help my schedule out.’ I for sure made a mistake by picking a substance over what I previously chose, which was fitness.”

“It was strictly painkillers and I never mixed them either, even on Jersey Shore, which obviously people have seen me with a drink in my hand and I was never drunk. I was the guy that was the ladies man. You know, you can’t get girls if you can’t speak to them. So drinking was definitely not an issue for me,” he said.

We beg to differ on that one, though we’re wondering if heading back to his old Seaside Heights haunts will mean a relapse. MTV cameras will be there to capture it, for sure.

Do you think Jersey Shore will be boring this season?