Fans were pumped to check out the latest footage from the third film in the Batman franchise, The Dark Knight Rises, but for presenter Christian Bale, it was all about the one cast member who isn’t here anymore. 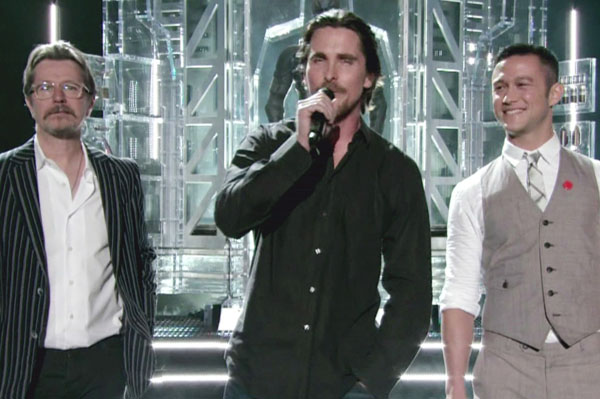 As if we could be any more excited for this movie.

On Sunday night, Batman himself — Christian Bale — stopped by the 2012 MTV Movie Awards with director Christopher Nolan and co-stars Joseph Gordon Levitt and Gary Oldman to show off a new clip from The Dark Knight Rises. However, it was a quick glimpse of The Joker in a Batman montage that got Bale emotional.

“Wow, great to remember Heath at that moment. Wonderful to see Heath Ledger there,” a choked-up Bale said before letting director Nolan take over to intro the clip. Ledger passed away in January 2008 in his New York City apartment after a drug overdose.

“I think Bruce Wayne’s story is one of the great stories,” Nolan said before adding that he’s still putting the final touches on the film, due in theaters on July 20. The clip shows little of the Caped Crusader. Instead, much of the focus is on the big time bad guy in this installment, Bane (played by Tom Hardy). Gordon-Levitt’s police officer John Blake and Anne Hathaway’s Selina Kyle.

“Why would you run? You can’t hide from us with a record like this,” Blake grills Kyle in the clip.

“Maybe it’s not you I’m running from,” a scared Catwoman answers, referring to Bane.

The rest of the short clip shows the creepy Bane breaking into the batcave and doing other assorted evil things, like blowing up bridges and creating riots. How formidable of an opponent is Hardy’s Bane? Well, he easily blocks a punch from Batman and appears to hold a broken Bat mask in the clip.

“That you should be as afraid of him as I am,” Kyle told Blake of what she knows about Bane.

What do you think of the new footage from The Dark Knight Rises?