Ed Asner’s ready to get up close and personal with audiences. The actor is returning to his Broadway stomping ground with the play, Grace. It will be the first time he’s performed onstage in over two decades! 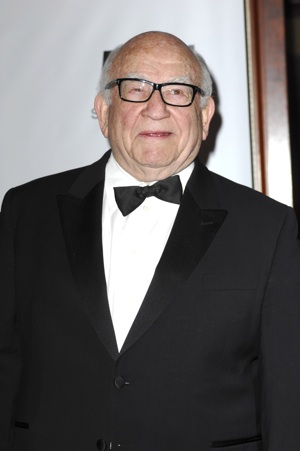 Ed Asner’s still got it. At 82 years old, the veteran actor is as active as ever. It’s been announced that he’s heading back to Broadway after a 23-year hiatus. Asner will co-star in the upcoming play, Grace.

According to The Hollywood Reporter, he’ll join Paul Rudd, Michael Shannon and Kate Arrington in the dark comedy from Craig Wright. The play centers on “a religious idealist (Rudd) who aims to open a chain of Gospel motels and moves in next door to Shannon’s cynical character; Asner will portray an abrasive exterminator.”

Paul Rudd hearts Leslie Mann in This is 40 >>

It sounds like Asner will be doing what he does best: playing a cranky senior citizen. The actor has made a career out of portraying outspoken characters such as Lou Grant from The Mary Tyler Moore Show and Carl Fredricksen in Pixar’s Up.

Up wasn’t Asner’s first exposure to the world of animation. He’s provided the voices of countless characters such as Roland Dagget on Batman: The Animated Series, Hudson on Gargoyles and Hoggish Greedly from Captain Planet and the Planeteers.

The actor has kept busy over the course of his 50-plus year career. He’s done everything from film and television to stage and voiceover work. The last time Asner appeared on Broadway was in 1989. It was for the revival of Garson Kanin’s Born Yesterday.

Most recently, Asner did a guest spot on CBS’ Hawaii Five-O, where he reprised the role of August March. It was a character he played 37 years ago on the original series.

Mr. Asner gets around, but in a good way!

Are you excited for Asner’s Broadway return?