Carrie Prejean she ain’t. Three years after Perez Hilton slammed the former Miss California, Olivia Culpo wins the Miss USA crown (and admirers in the LGBT community) for her answer to a controversial question about transgender beauty queens. 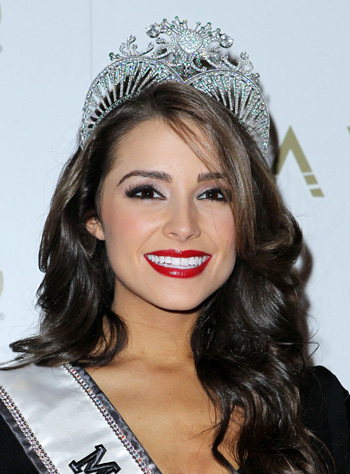 In what was easily the toughest question of last night’s Miss America pageant, “Would it be fair if a transgender woman won the Miss USA title over a natural-born woman?” the 20-year-old Boston University student calmly replied: “I do think it would be fair.”

She acknowledged some people might “be a little apprehensive to take that road because there is a tradition of natural-born women” but that “there are… so many people out there who have a need to change for a happier life. I do accept that because I believe it’s a free country.”

The audience erupted in applause, and the response to Culpo’s response has been equally positive over at GLAAD.

In a statement following last evening’s broadcast of the 61st annual pageant, The Gay and Lesbian Alliance Against Defamation said the “crowning underlines the Miss Universe Organization’s commitment to accepting and including all women.”

Earlier this year, GLAAD and the Miss Universe Organization, which operates the Miss USA pageant, worked together to open the competition up to transgender contestants. The organization previously came under fire when Jenna Talackova (remember her? the Miss Canada who was born male but underwent gender reassignment surgery?) was disqualified from competing in the Miss Universe contest. The decision was later overturned.

Culpo also had a Twitter user to thank for what could have been an uncomfortable question. For the first time in the pageant’s history, judges took questions from users on the social networking site. Judge Rob Kardashian — who appeared in Dancing With the Stars season 13 alongside transgender advocate Chaz Bono — did the asking. GLAAD also acknowledged openly gay chef Cat Cora as among this year’s celebrity judges.