In the ancient Greek myth, Prometheus is the Titan who steals fire from the gods, giving humans power they were never meant to have. In this skillful work of science fiction that includes one radically rogue robot, director Sir Ridley Scott explores the biggest question of all time — how did we get here? 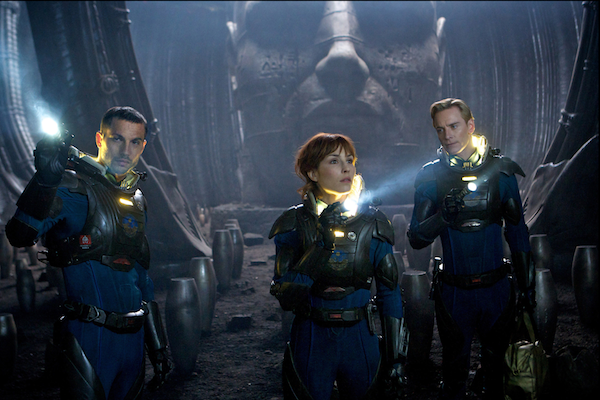 Prometheus dramatically opens with a stunning creation myth — a human-like creature, porcelain white with vibrating muscles, stands on the edge of a rocky cliff. Opening a small orb, he drinks its inky contents before diving into the raging river beneath him. His body literally rips apart making his red blood cells, then the molecules of his DNA, splash through the water possibly seeding earth with what may become human life.

Cut to the year 2089, where two archeologists, Elizabeth Shaw and Charlie Holloway, study the ancient cave paintings of a man pointing to a cluster of stars. Once this cluster of stars is proven to exist in a galaxy far, far away, they team up with mega-corporation Weyland Industries for a two-year journey to “meet their makers” — for better or worse.

Shaw (played by Noomi Rapace, the original Lizbeth in the Swedish version of Girl with the Dragon Tattoo), wears a cross around her neck and hopes to confirm her more traditional religious belief in a single “creator.” While her boyfriend Holloway (Logan Marshall-Green) is more skeptical, he’s still excited to find any answers to humanity’s oldest questions.

Once onboard the mega-ship Prometheus, we meet Weyland Industries exec Meredith Vickers (Charlize Theron). She is terse, agile and has a mechanical coldness only briefly warmed up by the gorgeous ship’s Captain Janek (Idris Elba), who accuses her of being an actual robot. Turns out she’s flesh and blood, perhaps even regretfully so in her mind.

The icy Vickers is mirrored by her artificially intelligent assistant David version 8 (think HAL with a body), who could be her electronic twin brother. David (Michael Fassbender), like all robots in fiction, longs to be human and watches Lawrence of Arabia over and over, trying on Peter O’Toole’s dialogue and styling. And, like all robots in fiction, David version 8 has a sinister plan for the humans onboard the spaceship. 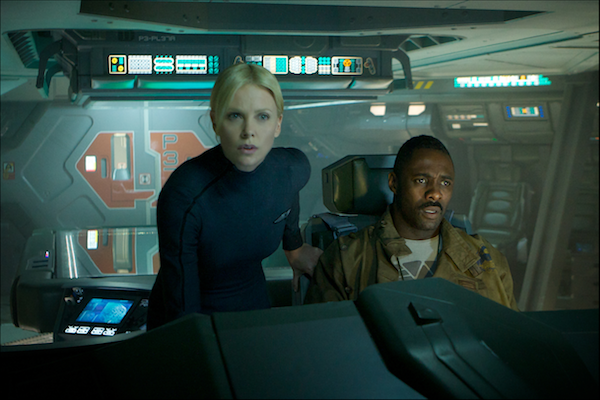 The movie really gets going, however, once the crew reaches their destination and goes off to explore in sleek Neoprene space suits. Inside an alien-made structure, the scientists see ghost-like images of simian-style creatures, stampeding from some unseen threat. When they get their hands on a decapitated alien, they hook its head up to a contraption seemingly thought up by Dr. Frankenstein and the head comes to life — for a short, painfully disturbing moment, before exploding into a green, soupy mess.

Could this puddle of genetic material be one of humanity’s engineers? If so, what was he running from? The space team finds out soon enough, when they are attacked by serpent-like aliens who are desperate to slither into any and all human orifices. Ew!

Prometheus asks more questions than it answers, but delivers on top-notch sci-fi action sequences, boldly going where no filmmaker has gone before. The CGI of celestial orbs and alien-scapes are truly beautiful and inspiring, just as the bleak, lowly aliens are truly repulsive. Most shocking of all is the scene where Elizabeth Shaw crawls into an automated surgery booth and gives herself a cesarean section, birthing a hideous alien-baby no mother could love. 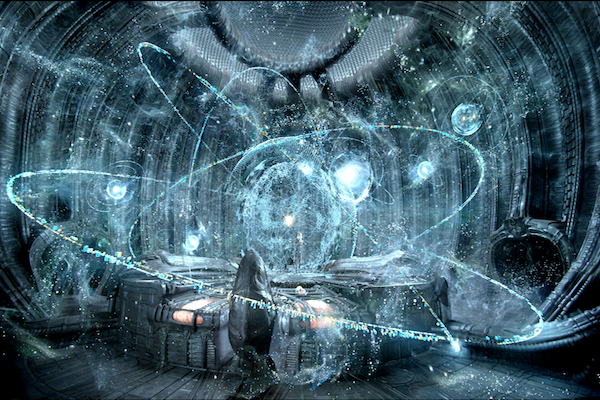 Bottom line:  Prometheus is an imaginative, frightening and entertaining full-service work of science fiction that includes the bold female characters Ridley Scott is famous for bringing to film. Perhaps not quite as iconic as 2001: A Space Odyssey or Scott’s own Alien, but a must-see in 3-D. Enjoy!