Kathryn Joosten, famous for her Desperate Housewives role as Mrs. McCluskey, has died at the age of 72 from lung cancer — much like her character did on the series finale just weeks ago. 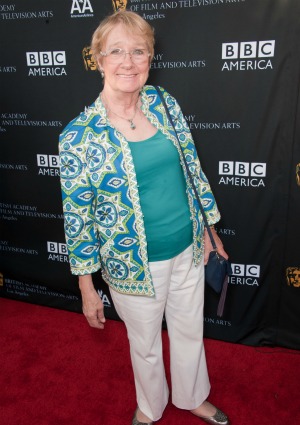 Kathryn Joosten and beloved neighbor Mrs. McCluskey have both lost their battles with cancer. The latter on screen, in the series finale of Desperate Housewives, and the former, unfortunately, in real life.

News of Kathryn Joosten’s death broke Saturday, via her rep who shared, “Kathryn passed away this morning after a valiant fight against her cancer. Her family was with her. Funeral arrangements are pending. This is a terrible loss, and she fought as hard as she could.”

“The family of Kathryn Joosten, two-time Emmy winner, long-time Governor of The Academy of Television Arts and Sciences, lung cancer advocate, and so much more, regrets to announce that Kathryn succumbed to her 11-year battle with lung cancer today, June 2, 2012, surrounded by love and humor till the end. Thanks to everyone for their love and support. We are laughing through our tears. We love you, Kathy, thanks for everything.”

Fans of Desperate Housewives likely recall Mrs. McCluskey’s death in the series finale episode, which aired on May 13, 2012. Both the real life actress and the Wisteria Lane resident succumbed to lung cancer battles.

In the final season of the show Karen McCluskey was diagnosed with terminal lung cancer, and her friends opted to care for her during her illness rather than allow her to go to a hospice. As a last valiant deed she confessed to the murder of Gabrielle’s uncle in a bid to protect her friends and neighbors from criminal prosecution. Much like Kathryn Joosten, Mrs. McCluskey died at home.

In reaction to news of Kathryn Joosten’s death, Felicity Huffman, who played Lynette Scavo on the series, tweeted Saturday, “All my prayers and love to [Kathryn] Joosten’s family. Rest in peace, she was an amazing woman and a wonderful actress.”