Lil Wayne may be one of the Thunder’s biggest celebrity fans, but even he needs a ticket to get into a game. A Thursday night incident has the rapper tweeting about being denied entry. 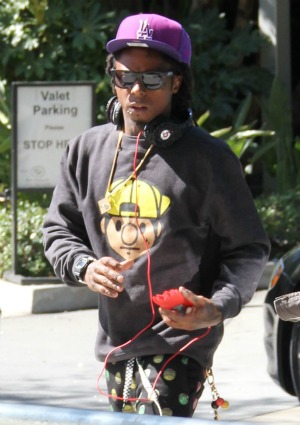 Lil Wayne denied entry into a Thunder game? You better believe it! Celebrity status means nothing to the NBA gatekeepers, who insist if you don’t have a ticket you’re not gettin’ in.

After being rejected from the NBA playoff game for not having a ticket Lil Wayne tweeted, “Was going to go to the Thunder game tonight but was denied by the team to be in their arena…”

It turns out that saying Lil Wayne was denied entry might be a bit harsh — it turns out he’s just not as special as he thought.

The not engaged rapper’s people had requested tickets but insisted he be seated in the front row. Those seats sold out long ago, and so none were saved in his name — but apparently Wayne didn’t get the memo.

Thunder spokesman Dan Mahoney commented on the Lil Wayne NBA game incident explaining, “We’d love to have him at a game, but like anyone else, he needs a ticket.”

Looks like Lil Wayne’s feelings are hurt all the same. He signed off the tweet about being denied entry, “Wow. Smh. Go Spurs!”

Ouch! Wonder if the Oklahoma City Thunder just lost one of their most famous fans?

Kevin Durant, forward for the team, is now trying his best to make amends with Lil Wayne by offering him two tickets to Game 3 on Saturday. “We need people like that around here,” the baller told reporters.

Should Lil Wayne have been denied entry to watch the Thunder, or given special treatment?