Remember Crystal Harris? She was the bleach blonde Playmate who left Hugh Hefner just days before their June 2011 wedding. Well, she’s back and oh so sorry for breaking the Playboy mogul’s heart. 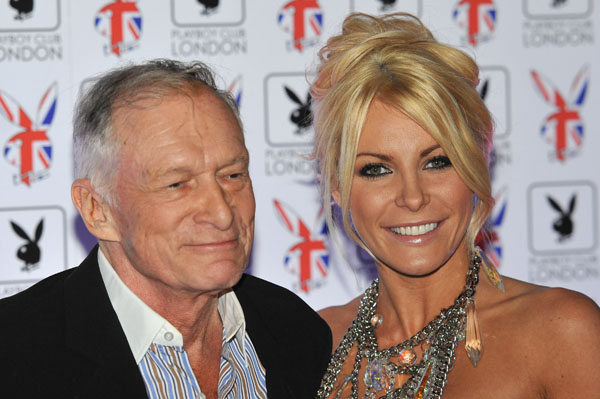 Guess her relationship with Dr. Phil’s son didn’t work out. Former Playboy Playmate Crystal Harris — most famous for leaving Hugh Hefner a week before their wedding — is now back living in the mansion, Hef confirmed Friday.

“Getting back together with Crystal Harris shouldn’t be a big surprise, since I have a history of remaining close to former girlfriends,” he tweeted.

Rumors of a Harris/Hefner reunion emerged Thursday afternoon with sources telling RadarOnline that the blonde bombshell “begged” to come back to the Playboy Mansion.

“Crystal begged Hef to let her come back,” the source told the magazine. “He surprisingly doesn’t have any hard feelings against her, so he let her move back into the Mansion.”

That reportedly didn’t sit too well with Hef’s current “number one” Shera Berchard.

“Shera Berchard, Hef’s #1 girlfriend, moved out as soon as Crystal moved back in,” the source said. Hef was upset over the development, but he’s not that upset. “Hef and Crystal are really happy back together.”

He’s nicer than we would be: The 26-year-old was reportedly seeing Dr. Phil’s son, Jordan McGraw, on the sly while engaged to Hefner. To add to the burn, she was the July 2011 Playboy cover girl introduced as “Mrs. Hugh Hefner.” A sticker reading “runaway bride” was placed over that part of the cover. Oh, and later she slammed her ex, claiming they had sex only once and it lasted “like two seconds.”

He was obviously hurt by the comments, tweeting that he didn’t understand why she lied.

“The sex with Crystal the first night was good enough so that I kept her over two more nights,” he wrote. She soon apologized.

“The Stern interview scared me, he’s harsh,” Harris tweeted a couple days later. “I was unprepared and blurted out things I shouldn’t have said, I’m sorry.”

All’s well and good now, according to the 85-year-old nudie mag chief — everyone is happy and Berchard didn’t leave the mansion.

“Shera & my other Mansion girlfriends welcomed Crystal here at dinner on Tuesday night, before playing games together,” he tweeted. “Shera is in Canada visiting her family, which is unrelated to Crystal being here.”

So, good for them? We still don’t understand how Hefner’s weird world of girlfriends works.