Jersey Shore star Ronnie Ortiz-Magro is known more for his fights with girlfriend Sammi Sweetheart than his outside projects. However, he’s looking to change that with his debut single. Yes, seriously. 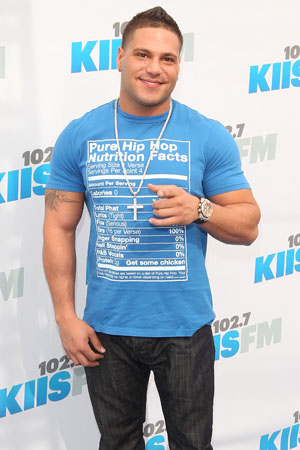 Want to hear Jersey Shore’s Ronnie Ortiz Magro sing? No? Too bad. The beefcake Bronx boy just released a song in time for your summer parties and it’s all about what not to do when you’re done fist pumping at Karma.

The song — “How The F%#k We Gettin’ Home?!” — features Jaylyn Ducati & Modo and includes some pretty profound lyrics.

“Waiting for a night like this, I’ve been waiting for so long / We don’t take it easy, someone take my keys, please / I don’t think I’m able to drive,” he “sings” in the song.

Hey, at least he knows not to drive. Cabs are here!

The song is also part of a new Facebook game called Songster, according to a company press release.

“In the Ronnie experience, players visit Ronnie’s shoreside party house and learn from Ronnie how to quickly make a song. Song creation is made easy by Songster’s SongGrid technology. Players simply drag and drop the instrumental, drum and vocal loops they want to hear and have a flawless remix in seconds,” the statement reads.

Sadly, Ron is no Pauly D, but we give him a solid ‘B’ for effort. You can officially start downloading it on June 5.

We do know one person who probably likes it, though: his on-again girlfriend, Sammi Giancola. The two were spotted smooching Thursday as they moved back into the Shore house in Seaside Heights, New Jersey. Another shocker? Pregnant Snooki was spotted moving her massive bags into the house… well, her castmates helped her. Guess her plan to stay in a nearby house didn’t work out?

Either way, it’s going to be another crazy Jersey Shore summer. Game on.