With Fifty Shades of Grey at the top of many women’s reading lists, I can’t help but recall my own (brief) investigation into the world of S&M. It wasn’t as sexy as you might think… 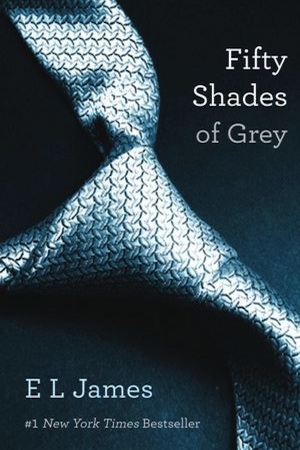 The best-seller has inspired throngs of women to add a little whipping and spanking to their sexual menus. But how far is too far?

“You know,” she said, “one of those chicks who gets paid to spank men.”

Being an actress, I decided to treat this endeavor as an acting role. I came up with a character name — Mistress Magma, a name inspired by an odd volcanic phase. The double-entendre escaped my young mind. Mistress Magma would wear a black latex mini-dress with fishnet stockings and tall, black, lace-up leather boots. The outfit was to die for!

Into the Red Room of Pain, er, dungeon 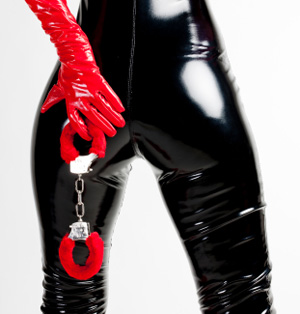 She lived and worked in a loft in downtown Los Angeles. Once there, I was greeted by her slave, a wiry man in his 30s with a shaved head and tattoos. After leading me to a sofa where I sat with the other doms-to-be, he went to the kitchen area and heated up a frozen burrito in the microwave. Just another day as a consensual sex slave.

It was then Mistress Sabrina entered. She was a handsome woman with striking features. Her jet-black hair was as threatening as her opera-length patent-leather gloves and her tattoos gave her a super-hero-like persona. She commanded attention. She had a power I had never before seen in a woman — confidence and control; a literal master of her domain. These were all things I, regretfully, was not. She stood before me, larger than life. I was absolutely terrified.

Up until then, my sexual history had been pretty average. One boyfriend in high school, a second one through college. I was interested in knowing more about my sexuality, but that’s not why I was here. Or was it?

The Mistress handed out worksheets to all five female students, none of whom made eye-contact with me. On the sheet of paper was a list of activities. This list would be given out to her clientele at their first session to determine what things they were “into.” She explained that having them write it down was easier than asking them directly. Some of this stuff could be quite embarrassing. The list included things like shoe fetish, wearing women’s lingerie, whipping and spanking, being gagged, hot wax drippings, electrical play, puppy play (that’s a thing?), voyeurism and forced masturbation. Hm… some of these look familiar as part of Anastasia Steele’s proposed sexual contract with Christian Grey in Fifty Shades of Grey.

By now, I was starting to really sweat in my latex. This was some potentially serious stuff. Before I could ask any questions, the Mistress had us ladies-in-black holding hands in a circle as she invoked a Wiccan chant. She’s a witch, too? What the heck did I get myself into?

The guy with the Happy Meal fetish…

I know this all sounds like a scene from some Hollywood movie, but as I entered her dungeon, it became shockingly real. All her “tools” hung neatly on the wall. There were leather floggers, feather ticklers, nipple clamps, medical instruments and electrical gizmos. There was a wench for suspending people and an old-fashioned torture rack.

And then there were the ropes, chains and handcuffs. Many forms of creative cuffs for binding hands and feet, hogtying, etc. glistened in the black light. This was a torture dungeon. I had entered willingly, heck, I was paying to be here. After the Mistress demonstrated some of the equipment, it was time to test it out.

Her slave and an actual patron entered the dungeon. In fictional works like Fifty Shades of Grey, it’s easy to picture a man like Alexander Skarsgard (rumored to play Christian Grey in the upcoming film) as the man in control. But in real life, standing before me in a leather G-string, was a 60-something man with a gut and pasty pink skin. Definitely no Christian Grey. Okay, so the wisps of his pubic hair sticking out of the ill-fitting G-string might be 30 shades of grey, but I tried not to look too closely.

The slave brought in a Happy Meal. Yes, from McDonalds. The patron become noticeably excited and whispered to the Mistress. She took a paddle from the wall and smacked him firmly on the rump. After several swats, he sat cross-legged on the stone floor. Was he hungry, I wondered? Is this his favorite meal from childhood that his mother wouldn’t let him have? Were Happy Meals even around 40 years ago?

The Mistress opened the box and dropped its contents onto the floor. What happened next was just surreal. She looked at me, her eyes narrowing. She said, “Mistress Magma, stomp on the Happy Meal.”

“Stomp on the what?” I asked, turning white.

“The burger and fries. Tread lightly at first and then really dig your heels into the food. It’s all about watching your high heels squish it,” she said with total seriousness. 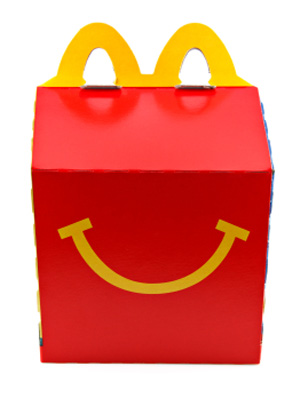 I dipped my toe into the soft bun of the burger. The patron’s face focused on my foot, as if he was watching a surgery being performed. The slave smiled with pleasure. He liked this stuff too?

I remembered a time step I learned in tap class as a kid. I slowly went through the machinations of the step, literally dancing on a hamburger and French fries. The plastic toy went crunch under my weight. Soon, the paper container holding the fries was shredded to bits. I dug my heels into the beef patty, smearing ketchup and pickles on the floor. All I could think was that I really hoped the slave would be cleaning this up, not me.

When the Happy Meal became an unhappy pile of mush and the patron’s G-string stood at attention, I became overwhelmed with thoughts of my childhood. I practically grew up on McDonald’s food, Happy Meals were truly a happy memory. What I was doing wasn’t just freaky, it was ruining my memory of eating this little meal.

Before I knew it, nausea set in and I just couldn’t trample the food any longer. I stopped dancing and looked at the mess. “Okay?” I asked in frustration. I didn’t wait for her reply. I stomped out of the dungeon leaving a trail of Happy Meal in my wake.

I left there that night, not embarrassed or humiliated, but baffled at the realm of sexual possibilities. How could it be that this strange act of trampling on food could make a man so physically excited? What had happened to him psychologically to make this so appealing to the point where he would pay for it? It was too much for my 20-something brain.