Kim Kardashian thinks Indian food is disgusting. No big deal, right? Well, apparently Indians are up in arms about it — and she apologized. 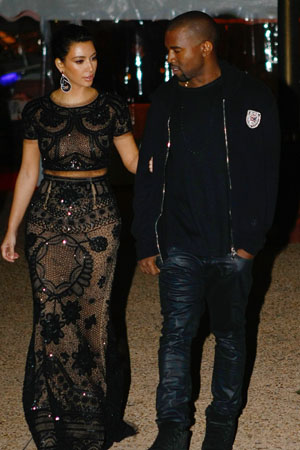 On Sunday night’s Keeping Up With the Kardashians, Kim Kardashian made a passing remark to her sisters, Kendall Jenner and Kylie Jenner, about how she thinks Indian food is “disgusting.” Apparently, not liking a type of food means you’re slamming an entire country, because she was forced to clarify and apologize for her remark via her blog.

“So on this week’s episode of Keeping Up with the Kardashians I said that I thought Indian food was disgusting. In NO way was this intended as an insult to the Indian people or their culture. This is just my own personal taste,” she said.

Kardashians getting $40M big ones in new E! deal >>

“There are a lot of foods I don’t like… I hate cilantro and peppers, and there are definitely some Armenian foods that I personally find disgusting, but that doesn’t reflect my opinions on other Armenian people or my culture. My comment wasn’t intended to offend anybody. We all have our own opinions and tastes and I was simply expressing mine.”

Okay, we love to snark on Kardashian, but this one is ridiculous. We all have likes and dislikes when it comes to food, but that doesn’t mean we hate the country it comes from. Think about it: Do vegetarians and vegans hate America because they don’t eat all-American beef? Of course not — same principle here.

So Kim K doesn’t hate Indian people, but she might be moving in with her boyfriend, Kanye West. Both the reality star and rapper are selling their luxe Los Angeles-area mansions, according to TMZ. Kardashian reportedly gave a private listing on her $4.8-million mansion in Beverly Hills, while West did the same with his. Could they be looking to consolidate? It sure seems like it, but the official Kardashian news service — otherwise known as E! — says that reports of shacking up are “premature.”

So, why are they selling? No word on why West is getting out of his place, but Kardashian wants to move up in house.

“She needs more privacy,” a source told the network.

The girl who lives her life in the press and through reality television needs privacy? Uh, okay.