There’s no love lost between Matthew Fox and former costar Dominic Monaghan. The latter has publicly accused the former of being a woman beater, asserting Matthew Fox has hit women on multiple occasions. 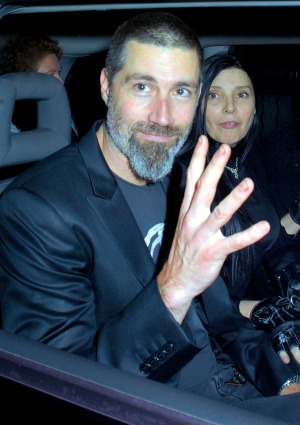 The “Matthew Fox beats women” gossip began when a female Lost fan asked Dominic Monaghan to help get his series costar to join Twitter too. The 35-year-old English actor shot back bluntly, “He beats women. No thanks.”

The woman then responded, “WHAT ABOUT ALL THOSE GOOD TIMES YOU HAD TOGETHER?!” Though it seems she may have assumed too much about the morale on the set of Lost.

Dominic Monaghan then replied, “how do you know we ever did?you don’t know either of us.he beats women.not isolated incidents.often.not interested.”

Not surprisingly, word of the woman-beating accusations quickly reached Matthew Fox. A source speaking to TMZ denied the allegations outright, adding that Monaghan’s behavior was baffling. Though the two actors haven’t spoken in a few years, the source claimed there was no bad blood between them during their Lost days.

Unfortunately for Matthew Fox’s reputation however, there was that private-punching incident in 2011. The actor allegedly hit a female bus driver in the genitals and chest after she blocked him from boarding a bus that had been rented for a bachelor party.

As of Thursday, Dominic Monaghan has neither removed his accusations from Twitter nor made any sort of trackback — though he did share this message with his followers: “Oh haters,for you to feel SO strongly, you know you LOVE me really.I love you too.Lets dance.You can’t help yourself.Cmon,you’ll feel better.”

Do you believe Dominic Monaghan’s accusations that Matthew Fox beats women are true?