Fans have wondered about Rihanna and Drake’s relationship for a couple of years. A few photos of the pair — snapped over the weekend — have reignited those rumors. So, are these two dating or just friends with benefits? 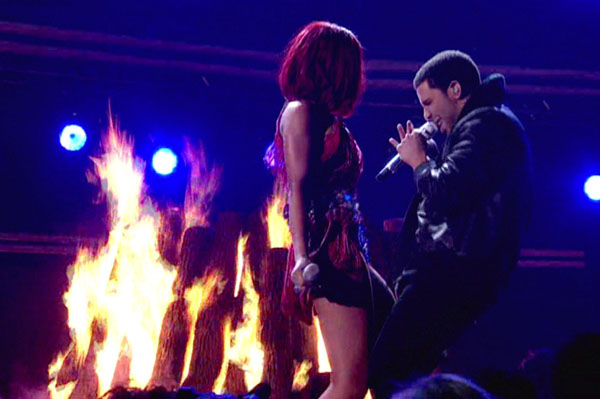 Rihanna has apparently dated everyone this year — including your boyfriend — if you believe all the rumors. At the very least, she’s been connected with Ashton Kutcher and her violent ex-boyfriend, Chris Brown. Now, sources are saying that she was spotted with another ex (and duet partner) Drake.

“Rihanna was all over Drake this weekend,” a source told US Weekly of the pair in Miami. “They were holding hands and dancing all close on the dance floor.”

The “Take Care” duo dated for a while in late 2009 after she left Brown, though they broke up soon after.

“We weren’t really sure what it was,” Rihanna told NYC DJ Angie Martinez of their relationship. “I definitely was attracted to Drake, but I think it is what it is, like what it was. We didn’t want to take it any further. It was a really fragile time in my life, so I just didn’t want to get too serious with anything or anyone at that time.”

Drake also talked about the relationship in an interview with Elle last year.

“I guess I thought it was more,” he lamented, adding that RiRi was his first — and it sounds like only — famous girlfriend. “That was the first girl with any fame that paid me any mind. You spend days reading about this person in the magazines. All of a sudden you have this number one song and you’re at some birthday party and there she is. And you’re just some naive kid from Toronto staying in some s****y a** hotel who got invited to this party on a whim.”

Drake later admitted that she played him like he’s played other girls — and he admitted it sucked.

“You know what she was doing to me? She was doing exactly what I’ve done to so many women throughout my life, which is show them quality time, then disappear. I was like, wow, this feels terrible,” he told the New York Times.

So, it sounds like he was pretty brokenhearted about the whole thing. But maybe — just maybe — they’re getting back together. They make a cute pair and Drake’s chill personality balances out Rihanna’s in-your-face raunchiness.

But then again, maybe not.

“She’s not ‘dating’ Drake or anybody,” an insider told the gossip mag. “She’s single.”