Kristen Stewart just loves her boyfriend’s… acting ability. Check out what she has to say about Robert Pattinson’s role in the upcoming flick Cosmopolis. 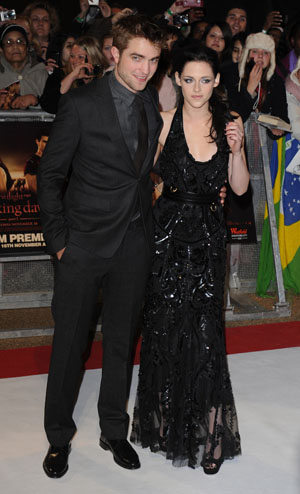 Bella Swan is so proud of her Edward Cullen… er, we mean Kristen Stewart is so proud of her real-life boyfriend, Robert Pattinson. The Snow White and the Huntsman actress gushed over Pattinson’s performance in his new film Cosmopolis in an interview with MTV News.

followes eccentric billionaire Eric Parker (Pattinson) as he goes through a series of weird events while trying to cross Manhattan for a haircut. It has a little of everything, according to Pattinson — except his junk.

“Five minutes before we filmed, David told me, ‘I want to see the bottom of your balls on the top of the frame.’ At the moment, I reminded myself that I would do anything for him. So I went back to see him and told him that wouldn’t happen,” he said, of telling director David Cronenberg that he wouldn’t go full frontal.

“He took it really well. At the start, it’s a very bizarre scene that you won’t see again in another movie, I promise.”

Pattinson and Cronenberg must have gotten along on-set — the pair is already set to start work on another film later this year.

“I don’t know when exactly we’re going to shoot. It will be David’s first movie in America,” Pattinson said. “In Los Angeles, to be exact. It will be about the film industry and I promise that it’s going to be really weird.”

But first for Pattinson comes Mission: Blacklist, the film that revolves around the hunt for former Iraq dictator Saddam Hussein. Oh, and then there’s all that promotion for the second installment of The Twilight Saga: Breaking Dawn.