Justin Bieber’s Norway concert chaos has left 49 shrieking tweens injured. One day after the Bieber state of emergency, Oslo’s mayor is calling for an investigation. 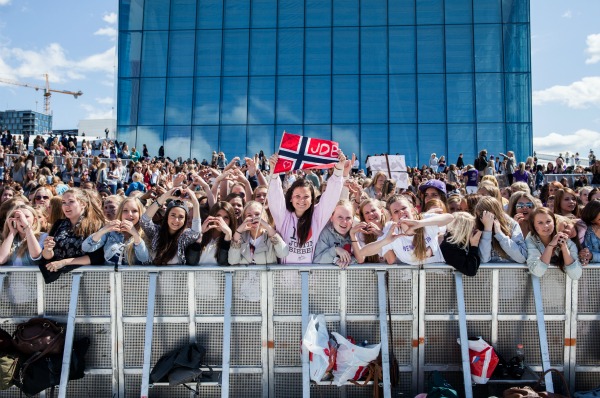 The injury tally from Justin Bieber‘s concert in Norway includes 49 people hurt, 14 of whom necessitated ambulance rides to the emergency room. In the aftermath of what was described as a “Bieber state of emergency” on Wednesday, the city’s mayor is calling for an investigation into what went wrong.

Oslo, Norway Mayor Fabian Stang said after the Justin Bieber concert, “I have already called on the Emergency Planning Agency to examine the entire event from the planning stage to its implementation. We have to find out what went wrong and why it happened.”

Before the teen sensation took the stage outside of the city’s opera house, police requested Bieber’s assistance in trying to tame the crowd that reached over 10,000. Complying with their request, the “Boyfriend” singer tweeted before the show, “NORWAY – please listen to the police. I dont want anyone getting hurt. I want everything to go to plan but your safety must come first… for the show to happen u must all listen to the police. we are all concerned for your safety and i want what is best for u. please listen.”

Justin Bieber reportedly arrived at the Norway concert via helicopter, and after performing six songs, was immediately whisked away in a police boat. At one point fans began screaming and chasing after a car they believed contained the teen heartthrob.

Footage from Bieber’s concert in Norway is set to air in the upcoming Justin Bieber: All Around the World TV special on June 21. He’s now headed to Paris for his next scheduled appearance.

Check out a video of the Justin Bieber concert crowd from Norway!