Demi Lovato is healthy and happy — and she’s more than willing to show off her rocking body on the cover of the July issue of Cosmopolitan. Find out when she plans to have kids and her relationship dealbreaker. 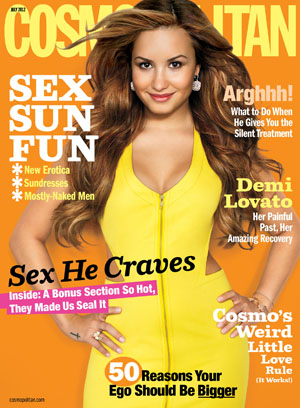 Demi Lovato has come a long way in the almost two years since she went to rehab: She’s successfully completed treatment, released a successful album and is now a spunky judge on The X Factor. Does that mean the former Disney star has a hold of her problems for good?

“I felt relieved when I found out [about my bipolar disorder],” she told Cosmopolitan. “Like I’m not completely crazy; there’s a medical reason for all of it.”

Lovato also admits that she has her ups and downs.

“It’s a daily thing; you don’t get time off from it. And if I feel myself slipping back into old patterns, I have to ask others for help, which is hard for me to learn, because I really like doing everything on my own,” she added in the interview, on newsstands on June 5.

The Texas native is now looking to the future. What does she want? Kids and marriage, of course.

“I want to be married with kids in 10 years,” she revealed, adding that she doesn’t judge potential suitors based on their pasts. “I don’t have many deal breakers. I’ve done so much in my life, it doesn’t feel right to judge other people.”

Demi Lovato: Drug obsession could have killed me >>

That doesn’t mean she’s willing to let a man steamroll over her.

“Oh, I know one quality I won’t tolerate. I would never be with a guy who is controlling,” Lovato added.

We don’t think that will be a problem: She’s already butting heads with Type-A men on The X Factor set — and she doesn’t back away from telling Simon Cowell and L.A. Reid how she really feels. Cowell even tried to flirt with her during their stop in Austin — and she shut him down, cold.

“It’s too bad we didn’t meet 10 years from now,” Cowell winked at Lovato, according to CNN.

Lovato didn’t miss a beat. “More like 30 years,” she deadpanned back.

The speechless Brit took a moment to respond before saying “Demi, you’re going into the naughty chair.”