The struggle between doing what is expected of you and following your heart is a familiar one across cultures and time periods — after all, Jyotsna Sreenivasan was inspired to write And Laughter Fell from the Sky after reading Edith Wharton’s The House of Mirth. A bright and unique story of an Indian woman struggling to be who her family wants to be, And Laughter Fell from the Sky is a story that will resonate, regardless of your cultural background. 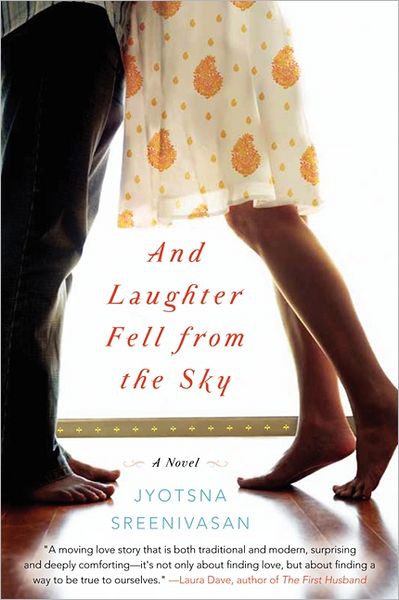 Rasika is a beautiful Indian woman, but at the age of 26, she’s been of marriageable age for some time according to Indian standards. According to her parents, she’s a good Indian girl — she still lives at

home, she has a good job at a bank (though they would prefer she pay more attention to getting married than to her career) and most of all, she listens to what her elders tell her. So when her parents begin to pressure Rasika to marry, she goes along with it. After all, she wants to do what is expected of her, as any good Indian daughter should do.

But if Rasika’s parents really knew the person she was, they’d be shocked. She has trouble reconciling the side of herself she shows to her parents with the wilder side, the one that enjoys going out, having fun, drinking and sleeping around a bit. While many would just see Rasika’s behavior as the standard for a young, single woman in her 20s, it’s absolutely unacceptable in Indian culture, and she truly wants to stamp it out. Rasika wants nothing more than to please her parents and be the dutiful daughter they think she is, but how can she reconcile that with what her heart tells her and what she truly wants?

When Rasika runs into Abhay, an old family friend, they really connect. Abhay was the one they all watched growing up — he had the best grades and won all the awards. But now, Abhay is adrift — he doesn’t know what he wants out of life and is in no hurry to figure it out. He works in dead-end jobs that would never make a true career, searching for his true calling in life. Abhay understands Rasika’s dilemma and appreciates her for who she is, and though she has feelings for him, she knows her family would never approve of the match. As Rasika’s parents press forward with her search for a husband, Abhay insists that what they have is worth taking a chance on, and he hopes that one day, they will be together.