Vampires are taking over the (social media) world. Do you love Twilight? Follow its official Twitter page. Obsessed with The Vampire Diaries? They’ve got an app for that. Check out our infograph to see whose social presence has the biggest bite. 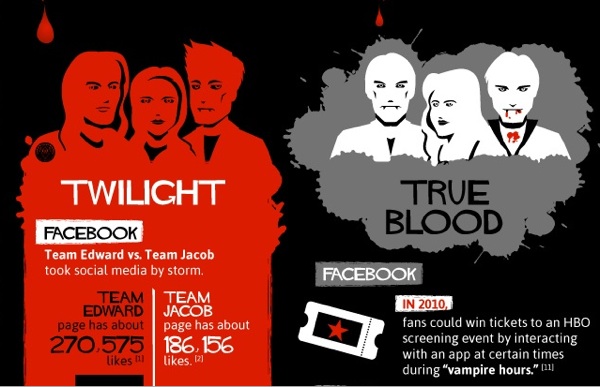 It’s no secret that vampires are all the rage. From Twilight and True Blood to The Vampire Diaries, bloodsuckers are where it’s at. The geniuses behind these properties work hard to keep fans engaged. What’s their biggest weapon? Social media. They’re using networks like Facebook, GetGlue and Twitter to keep us under their vampy spell.

It all started when Twilight‘s Team Edward vs. Team Jacob battle descended upon Facebook. Edward had about 270,575 Likes, while Jacob was trailing with 186,156. Around the opening of the sequel New Moon, they’d moved to Twitter and made their presence known. The Twihards were in full force, scoring the film 81,000 tweets a day!

In 2009, The CW produced a small screen adaptation of their own supernatural series — The Vampire Diaries. To date, it’s the network’s highest-rated drama and we’re sure social media has something to do with it.

In October 2011, the official Vampire Diaries game debuted on Facebook. It allows players to complete tasks assigned to them by the show’s characters. Fast forward to Feb. 2012: the series was named one of the top 10 check-ins on GetGlue. After 20 check-ins, fans can earn free TVD merchandise, which is a huge incentive.

HBO’s True Blood is also on the GetGlue bandwagon. In 2010, they teamed with the site to give 10 percent discounts to fans who participated. It was a GetGlue first. A year later, True Blood became the most popular summer show with 490,787 check-ins.

So overall, who has the biggest social media presence? Who’s getting the most bang for their fangs? Check out our infograph to find out.