Beyoncé showed off her singing skills — and rocking body — at her “comeback” concerts in Atlantic City over the weekend. How did Queen B get her body back in the five months since having Blue Ivy Carter? Lots of lettuce and workouts. 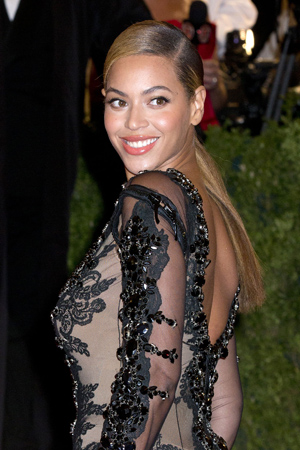 Can you believe it? Beyoncé only gave birth to daughter Blue Ivy Carter in January, but she’s already dropped 60 pounds, thanks to an usual diet.

“Y’all have no idea how hard I worked! They had me on that treadmill. I ate lettuce!” she told the audience during her four weekend concerts at the Revel Resort and Casino in Atlantic City, New Jersey.

Bey barely waited until Blue Ivy was out of the womb to start working on her body. A source told Star magazine in March that she brought a trainer in to live with her and Jay-Z in their Tribeca apartment.

“Beyoncé and Marco are up at 5 a.m. for a two-hour workout, and they do it again at 5 p.m.,” the source said at the time. “They do a mix of cardio, Pilates, plyometrics, yoga and, of course, dance.”

The source added that she lived on a strict diet of “protein shakes, egg-white omelets, pineapple chunks and lots of ice-cold water.” Not exactly lettuce, but still not that appetizing.

All the hard work paid off, though: Her series of concerts were well-received by fans and celebrities alike — even Michelle Obama and daughters Sasha and Malia attended one of the shows. Beyoncé even found the time to hang out with one of her supposed foes: Kim Kardashian.

“Kim thought it was such a great show,” a source told US Weekly. “There’s always some random rumors there is tension between them and there totally isn’t! Kim had so much fun.”

And how did Beyoncé plan to celebrate her performances? With lots and lots of chocolate.

“Now tonight I’m gonna get chocolate wasted!” she joked. Great to see Queen B where she belongs: Onstage.