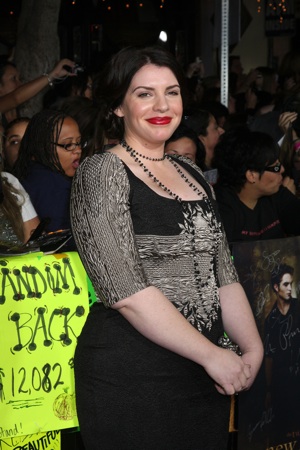 It feels like every wife and mother is obsessed with E.L. James’ Fifty Shades of Grey. The book, which is a New York Times bestseller, was inspired by the relationship between Twilight protagonists Edward and Bella.

The big difference is Twilight’s Edward wants to preserve Bella’s virginity until marriage, while Grey’s Christian happily pulls Anastasia into a world of bondage and dominance.

Selena Gomez gets blue in Fifty Shades of Grey parody >>

“I haven’t read it. I mean, that’s really not my genre, not my thing,” she said lightly. “I’ve heard about it; I haven’t really gotten into it that much. Good on her — she’s doing well. That’s great!”

Ian Somerhalder in Fifty Shades of Grey? No, thanks >>

As for the Bella and Edward, Anastasia and Christian similarities?

“It might not exist in the exact form that it’s in,” Meyer said. “Obviously, [James] had a story in her, and so it would’ve come out in some other way.”

We think there’s enough room for both series to coexist.

What do you think? Are you more Twilight or Fifty Shades of Grey?