Prince William hasn’t publicly spoken a lot about his late mother, Princess Diana, until now: The dapper husband of Kate Middleton broke his silence in an interview with Katie Couric. Find out what made him sad on his wedding day. 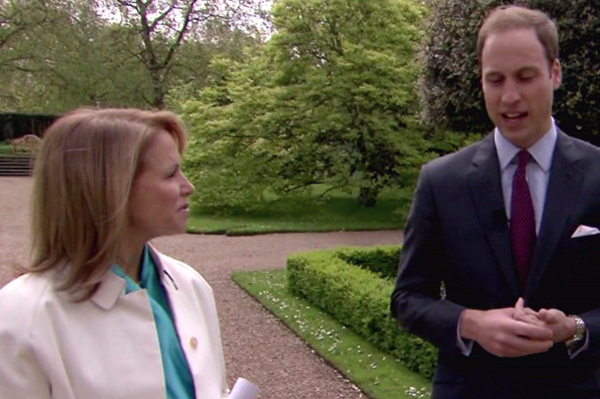 The image of young Prince William and Prince Harry walking behind their mother’s casket on that sad September day in 1997 is forever seared into our memories. The princes have adjusted well over the years to life without their mother, but Prince William recently revealed to Katie Couric that it was “very difficult” getting through his wedding to Kate Middleton without his mum by his side.

“I sort of prepared myself beforehand so that I was sort of mentally prepared … I didn’t want any wobbly lips or anything going on,” Wills, 29, told Couric in a new ABC interview celebrating Queen Elizabeth II’s Royal Jubilee. “It’s the one time since she’s died, where I’ve … thought to myself it would be fantastic if she was here, and just how sad really for her, more than anything, not being able to see it.”

His biggest regret? Diana won’t have the opportunity to meet Middleton.

“I think she … she would have loved the day and I think, hopefully, she’d be very proud,” he told Couric in the interview airing tonight. “I’m just very sad that she’s never going to get a chance to meet Kate.”

We’re sure that Diana would have loved Kate, given both of their interests in humanitarian work and fashion. Prince Harry also expressed feelings about his mother, telling Couric that his mother was there – in spirit.

“I think she had the best seat in the house, probably,” Harry said. “But yeah, she would have loved to have been there.”

Do you think Princess Diana would have liked Kate Middleton?