The reality show chef went all out at a Soccer Aid charity game over the weekend, landing himself in the hospital. Find out how the Hell’s Kitchen tough guy is feeling today! 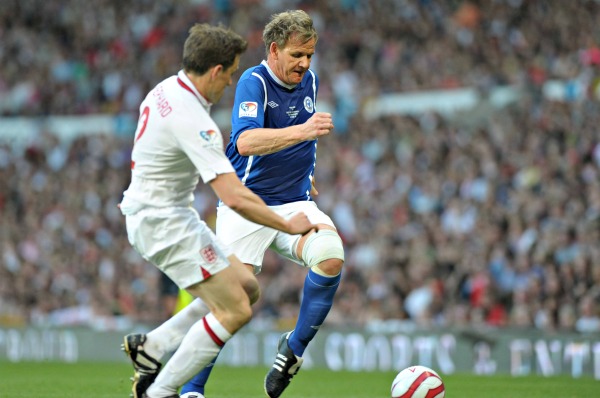 Gordon Ramsay is proving his trademark bark is tougher than his body. The notoriously harsh Hell’s Kitchen boss went down hard in a charity soccer match over the weekend, causing him to be carried off the field by paramedics in a stretcher.

Gordon Ramsay’s injuries resulted from being tackled during the celebrity Soccer Aid match in England on Sunday. The restaurateur tangled with former England national star Teddy Sheringham, and came up on the short end of the battle. The 45-year-old had to be given oxygen on the sidelines and was later taken to an area hospital.

Not wanting fans to be overly worried, Gordon Ramsay tweeted on Monday, “Thx 4 all the messages. Out of hospital after receiving amazing care from medics at ground & hospital. Bit sore but fine.”

The frequent reality show chef wasn’t the only celebrity to take a hard fall for the sake of charity, however. Will Ferrell also went down during the game after sustaining a leg injury. The 44-year-old actor has yet to update fans on his status post-match.

Injuries aside, Soccer Aid appears to have been a great success. With the help of other famous stateside faces such as Woody Harrelson, Mike Myers and Ed Norton, $6.4 million was raised during the game attended by more than 67,000 fans. The year 2012 marks the fourth annual game played for Soccer Aid, which pits a team of England’s legendary players and celebrities against a team simply described as “the Rest of the World.”

Despite the bodily sacrifices made by Will Ferrell and Gordon Ramsay, England prevailed 3-1.