Now that war has finally arrived in the second to last episode, “Blackwater,” we wait for the final episode in Season 2 of HBO’s Game of Thrones, airing next week, to get a peek (and some closure) at our characters’ resolutions. 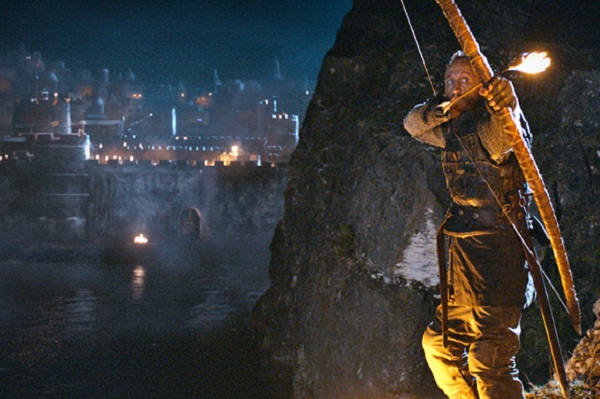 It’s been a long journey, this Season 2 of Game of Thrones. I’ve had to adjust my expectations. We’ve traveled far on this treacherous road, experienced the good, the bad and the ugly… OK, well not so much the good but who’s keeping score?

Speaking of keeping score, how many beheadings in last night’s episode? There were at least two although I can’t be sure because at some point I just closed my eyes. One was particularly gruesome with stuff shooting out everywhere.

The point is, Game of Thrones is kind of like befriending an outlaw, or a crazed megalomaniacal ruler from another time. At first, you enjoy hearing stories while downing glasses of red wine but by the end of the evening (season) you’re not really sure you’re friends anymore. Suddenly, it’s the same story, always, about their path to glory and it’s littered with just a few too many heads on spikes.

If Game of Thrones has taught us anything it’s that history is gruesome. OK, it’s not real history but quasi-history, but still the message is clear.

During last night’s episode, the Battle of the “Blackwater,” it occurred to me: the water is black. Is it really black or is that just a figure of speech? According to this beautifully illustrated, detailed map — the seas in GOT are actually black. Last night’s battle in “Blackwater Bay” had some spectacular moments: as Stannis’ fleet stormed King’s Landing to take the Iron Throne, Tyrion let a fire fury meet their ships. Tyrion’s master plan was to line the water with “wildfire” dumped from a decoy/ghost ship so when Stannis’ fleet got too close, his trusty loyal knight, Bronn, shot a flaming arrow into the ship, which led to a massive CGI explosion in green that was pretty spectacular. Even though we saw hints of this coming earlier in the season when Tyrion met with the pyromancers, it was still spectacular.

What followed next was a big battle. That’s the long and short of it. Knights stormed the castle keep and the psycho-king that is Joffrey, fled like we knew he would. (Is it so wrong to wish so ardently for a character’s demise? I still believe it’s the chief reason many viewers watch.) Tyrion stepped up to lead the army and all was going well until a knight from the Kingsguard slashed his face. It’s unclear if this was Tywin’s army or his own (possibly a double-cross from someone on the inside?). We all hope, and suspect, that Tyrion will survive the night. Maybe Shae can rescue him. She is one bada** mistress, she carries a dagger strapped to her ankle. This is no dumb girl.

While watching Game of Thrones on my flat-panel TV from the comfort of my couch I am struck with two things: thank god I was not around in prehistory before you could do things like drive your car to Starbucks, get your iced coffee, drive home, think about what it means to be an English major (and MFA in creative writing), and actually place a value on literature so that one day — a day like today, Memorial Day, happily write recaps about a far more brutal time. All from the comfort of a modern home.

Still, Game of Thrones reminds us of the primordial qualities in all of us. Families still fight and bicker (but hopefully do not bring a vile of “essence of Nightshade” to the Thanksgiving table with the warning that it is “as dangerous as it is efficacious”); and office politics can get nasty (although most of the beheadings are metaphorical, thank goodness!); and dragons are long ago extinct (just go with it, note: this is me being sarcastic, I know dragons are fictional! Right! Right?) but that’s just it: Game of Thrones is pure fantasy escapism. HBO delivers with Game of Thrones.

Still… I can’t help feeling like with Season 2 HBO skewed the demographic decidedly male. Khaleesi is nowhere to be found (stuck in Qarth as she is) and the head-chopping was out of control this season (among other noted gruesome moments). In fact, I’d gander that it pushed the envelope for some men even. I count myself among Braveheart and Gladiator fans so it’s a question: Was it too much this season?

There was a definite lack of a narrative story for much of it… as I said last week, it’s a long build-up to the finale. Being that this is a show that brings out the primeval in all of us, even bloggers are wishing for Joffrey’s head on a spike and that would be one way to end the season on a high note. (This is what the Game does to you – you get caught up and wish for the bad people to go down.) 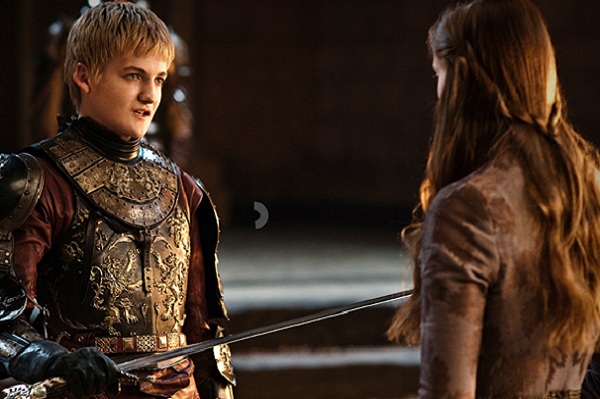 But as Sansa (the future queen), and the Los Angeles Times, notes: in the Game of Thrones world, anyone can get the ax. “The worst ones always live,” Sansa remarks as she wishes for Joffrey’s demise. (Maybe HBO will put this quote up on their “quote wallpaper” page.)

I’m still trying to get used to the fact, to HBO’s credit, that sometimes the heroes die. That’s what makes the series (potentially) so powerful. Yet when they play fast and loose with this — it just becomes empty gore and we lose the thread of the story. Hopefully, during the final episode next week, some of the storylines will tie up.

I was happy to see Sansa leave with “the Hound” even if Winterfell is under siege. It’s human nature to keep rooting for goodness in the dark, for someone to get out of the Rome-like King’s Landing with all its corruption.

The best thing about the series is the superb acting. Every single character is sublimely cast. Look at “the Hound” for example. From Shae to Arya — it’s amazing. I cannot list all here but here’s a link to the cast. HBO brings cinematic production qualities to the show as well — something that is often overlooked by critics. When was the last time we had such sweeping shots of such amazing landscapes and costumes on television? Cersei’s bizarre and fascinating breastplate over her gowns in last night’s ep is enough alone to watch. Dinklage, and all of the cast, deserve awards.

In this episode, Tyrion unleashed his inner giant: a leader of the army to stop the siege on his city.

Sansa finally came to her senses and will hopefully flee King’s Landing.

Cersei proves to be the mother-in-law from hell as she kept forcing Sansa to drink red wine (all while holding the Nightshade vial) and regaling her with tales from her twisted life. Complaining that the “hens” are all shut-in while the men fight. The hens being the noble, high-born women. They are locked in a room with a brutal assassin who’s there to kill them all should their court be overthrown. Thanks, Cersei. Beware of those who call you “little Dove,” Sansa, and flee while you can.

Tyrion is still underestimated. We see in the preview for next week that Tywin gets much of the credit for saving King’s Landing.

Season 1 was “Winter is coming,” Season 2 was “War is coming.” I can honestly say if Season 3 is “Witches are Coming” and we are treated to endless story lines about the witches circling Westeros on their broomsticks — until they finally arrive to have their heads chopped off in gory detail — I’m not sure I’ll be tuning in. Besides wishing for Joffrey’s demise, I’d like a return to actual storylines and character development and subtlety. OK, maybe not subtlety, the series is no Downton Abbey.

Yet it compels you to watch. It’s Shakespearean in theme, epic Roman in setting, and Greek tragedy all over the place. No matter what you think, Game of Thrones is a masterful adaptation and true to itself. It’s bold and messy and in your face; superbly acted, masterfully shot, and very well-written.

With Game of Thrones, what you see is what you get. It’s been an interesting ride and we’ll see how it all ends next week. If you cannot wait, there’s a preview here.