The third installation in the lucrative sci-fi espionage franchise, Men in Black III, proves audiences like black suits over tights and capes this week as it pushed The Avengers out of number one with a gross earning of $70 million at the box office. 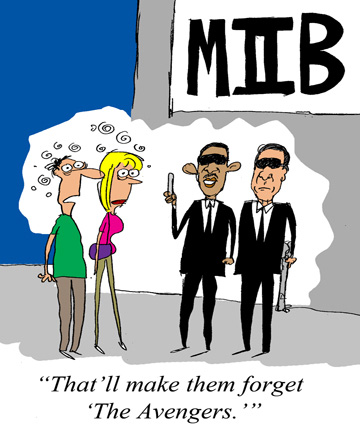 After three weeks at number one, The Avengers lost the top spot at the box office this weekend when Will Smith, Tommy Lee Jones and Josh Brolin hit the big screen in Men in Black III.

Predicted to gross more than $70 million for the four-day holiday weekend, Men in Black III proves not even a gang of heroes can sustain super power at the box office.

Coming in second (but nobody’s crying over the $500 million already earned) is The Avengers, the super hero ensemble about saving the Earth from its impending doom, starring Robert Downey Jr., Chris Evans and Scarlett Johansson. Deadline Hollywood predicts The Avengers will pull in $48.5 this weekend. Still looking good in tights!

The action-at-sea big-budget movie Battleship, starring Brooklyn Decker and Liam Neeson, comes in third place. Its estimated four-day weekend gross is $13.3, a bit disappointing for a film which performed well overseas before hitting the U.S. market.

Sacha Baron Cohen’s farce The Dictator slid into fourth place with an estimated earning of $11.5 million.

Also suffering from the power of Men in Black III is the new-out-this-week horror film about a group of tourists who decide that visiting the site of the Chernobyl disaster would be a good idea in Chernobyl Diaries. You can only imagine what happens. Zap. The film is estimated to gross $9.2 million, bringing it in at fifth place.

Coming in sixth is Johnny Depp’s vampire quirkiness Dark Shadows. Co-starring Michelle Pfeiffer and directed by Tim Burton, this film is an adaptation of the old TV series of the same name. Camp and hilarity ensue.

Another adaptation ranked in the top 10 this week is What to Expect When You’re Expecting, starring Jennifer Lopez, Cameron Diaz and Elizabeth Banks. The comedy about pregnancy and its subsequent side effects ranked seventh with $8.7 million.

Movie review: The epidural diaries in What to Expect >>

Rounding out the top 10 is Best Exotic Marigold Hotel in eight place with $8 million, The Hunger Games in ninth with $3 million and Think Like a Man in tenth with $1.8.

Comment below and tell us what you think of the upcoming blockbuster season.