In one of the most buzzed-about memoirs of the summer, Janet Groth talks about her 21 years as the gatekeeper of The New Yorker‘s writers’ floor.

When Janet Groth graduated from college in the mid-1950s, she had hopes of becoming an author. What 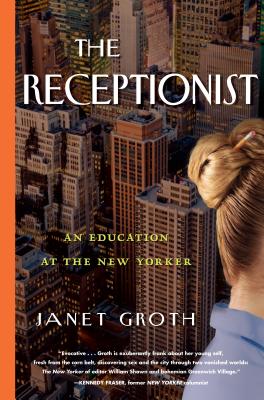 better opportunity than to use her meager connections to land an interview with E. B. White at The New Yorker. If she could stay out of the typing pool, she could advance to writer in no time flat. What really happened is something entirely different.

Groth indeed stayed out of the typing pool, becoming the receptionist for the 18th floor, which was home to the magazine’s famous writers. She handled their mail, learned to recognize their families’ voices on the phone, watered their plants and baby-sat their kids. She was also wooed by poets, taken out to lunch and invited to Europe. What she never did was advance beyond her job as the gatekeeper of the writing staff.

In a sometimes self-deprecating style, Groth gives us a candid look at what it was like to rub shoulders with the literary famous. From the fun and excitement to the frustrations and broken hearts, she gives us the insider’s story of what it was like to be an ambitious career woman in the years before the woman’s movement fully took off.

Despite the side benefits of being the receptionist, Groth repeatedly campaigned to be promoted to other jobs at the magazine, such as writer, fact-checker and book reviewer. Each time she was turned down, sometimes for sexist reasons (she was “too pretty” to do such work) and sometimes for policy reasons (only contract writers could write reviews). In 1978, after years of psychotherapy and after finding a very supportive Mr. Right, Goth freed herself from her glamorous-sounding but dead end position at The New Yorker, finally finishing graduate school, being tapped for a good university job and finding her way off the 18th floor.

The Receptionist is a don’t-miss memoir of an era, a literary magazine and a fascinating woman.