This week’s number one must-rent DVD is This Means War, the sexy, romantic action film about a woman who must choose between two gorgeous guys. Now, that’s a choice we’d all like to have, Reese! 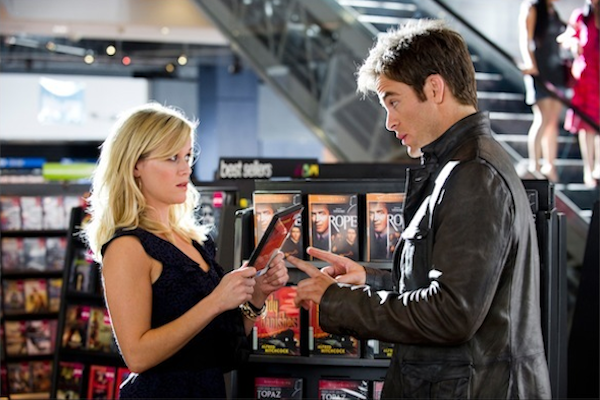 This Means War is the story of two guys, played by Chris Pine and Tom Hardy, who both fall in love with the same woman, Reese Witherspoon. Sounds like quite the conundrum. Well, it is. Especially since these two guys are secret agents used to doing undercover work. When they go head-to-head for this beautiful blonde’s heart, things definitely get interesting.

Movie Review: It’s hottie vs. hottie in This Means War >>

No. 2 — The Secret World of Arrietty

The adorable tale of “borrowers” who are the tiny people living in the walls of your house comes to life with brilliant animation by the makers of Ponyo. The Secret World of Arrietty is bold, surprisingly touching and stars Carol Burnett.

Movie Review: Confessions of a tiny teen in The Secret World of Arrietty >>

Hold onto your mate while watching this creepy screen adaptation of the popular novella of the same name. Daniel Radcliffe departs from his Harry Potter days to helm this horror film sent in a 19th century village. Muhahaha.

Movie review: Scary Potter creeps through The Woman in Black >>

Starring Cuba Gooding Jr. and Gerald McRaney, Red Tails is the story of the Tuskegee airmen who were called to action when their country needed them most during World War II.

This indie flick written and directed by Edward Burns is about a newlywed couple who must struggle to survive after the husband’s troubled sister comes to live with them. Sounds like it’s sofa city, sweetheart.