Lifetime Television has done the impossible. They’ve found an actor to star alongside Lindsay Lohan in their Elizabeth Taylor biopic — Liz & Dick. The film, which will chart the couple’s tumultuous relationship, is scheduled to begin production next month. 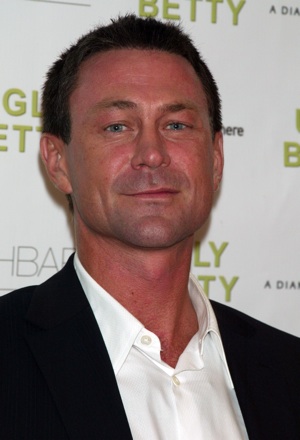 Lindsay Lohan has finally found the Richard Burton to her Elizabeth Taylor. Last April it was announced that Lohan would headline the Lifetime made-for-TV movie, Liz & Dick. And now, they’ve announced her partner in crime — Grant Bowler.

According to Deadline, “The biopic chronicles the enduring love of movie icons Taylor (Lohan) and Burton (Bowler), whose fiery romance was the most notorious, publicized and celebrated love affair of its day.”

Lindsay Lohan is picky about her Dick >>

They cut it close with the casting, considering production is slated to begin June 4. Executive producer Larry A. Thompson and Lifetime searched far and wide for a Welsh actor (like Burton) to play the part, but were captivated by Bowler.

Bowler, who’s originally from New Zealand, blew the producers away with his audition.

“Grant will add gravitas to our couple and bring to life one of the greatest actors who has ever lived,” Thompson said. “Burton was a Welsh poet, a rascal and a man’s man, who swept Elizabeth Taylor off her feet and flew her so close to the sun that they both exploded into stardust that still lights up Hollywood.”

Stateside viewers probably know Bowler from his stints as Connor on ABC’s Ugly Betty and Cooter on HBO’s True Blood. Overall, Bowler looks more like Burton than Lohan does Taylor. And we can’t wait to see what they’ll both look like in hair and make-up!

What do you think of Bowler as Burton?