Actress Malin Akerman has a hot body — and she knows it! She’s not the typical actress that only credits her body to good genes: She works for it! Find out her tips — and what it was like to make out with Tom Cruise. 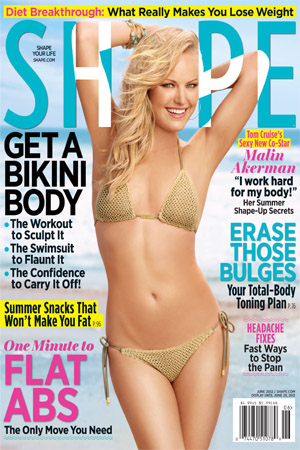 It’s safe to say that Malin Akerman is on the express train to superstardom. The 34-year-old Swedish actress is starring in a ton of movies this year, including the film adaptation of the hit Broadway musical Rock of Ages. She’s a great actress and all, but we’re more interested in how she keeps that rockin’ bod.

Luckily, she’s telling us how in the new issue of Shape.

“I’m not going to lie: I was born with good genes [her mother was also a model]. But when I overindulge, I can get a paunch in my belly. And I’ve always wished I had more beef in my booty,” she told the magazine (oh, the horrors!) However, she keeps it real when it comes to nutrition and exercise.

“I’ve never been on a fad diet or tried one of those crazy cleanses. I think they just mess up your system. I believe in eating as nutritiously as I can all the time — not just before I’m putting on a swimsuit. My mother raised me on fresh rather than processed foods, and that’s how I eat on a regular basis,” she said, adding that she does splurge as much as anyone else. “I have my splurges. I can’t live without chocolate. Though I barely consider it an indulgence because it’s good for you. I also love a thick steak and French fries. I try not to eat them more than once a week, but if they somehow land on the table in front of me, I won’t hold back. You’ve got to allow yourself the things you enjoy or you’ll just be miserable.”

As for exercise, Akerman said she’s a yoga enthusiast who’d rather stay close to home instead of at a sweaty gym.

“I prefer exercising in or near my home. I usually start my day doing some yoga poses and then go for a 45-minute hike in the park nearby. It’s hard to be consistent because of my schedule. There are days I only have time to do a few sets of crunches and push-ups in my living room or 10 minutes of jumping jacks. But no matter what, I try to do something each day.”

Akerman also gets the distinct pleasure of kissing Tom Cruise’s aging rocker character in Rock of Ages. Thandie Newton famously complained of kissing Cruise when they filmed the first Mission: Impossible sequel, but Akerman gives him nothing but praise for his tonguing skills.

“The script called for the tonguiest tongue kiss of all time. And we were like, ‘Let’s go for it.’ It was hilarious,” she joked. “Working with Tom was a dream come true. I can die happy now.”