In The Chaperone, Laura Moriarty starts with a true event, transporting readers to 1920s New York City through the story of Cora Carlisle, temporary guardian of the teenage Louise Brooks. 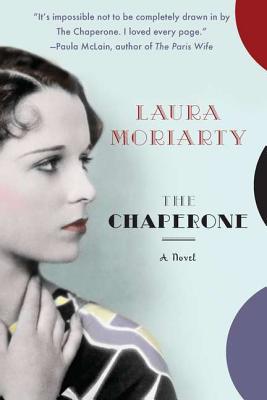 In 1922, Cora Carlisle, wife and mother, made the surprising decision to accompany her neighbor’s daughter, 15-year-old Louise Brooks, from Wichita, Kansas,  to New York City, so the girl could audition for a place in a prestigious dance company. Although not yet a Hollywood film star, Louise was already known for her trademark bad-girl behavior. With her fashion-forward bob and low-cut dresses, Louise was determined to take the city by storm.

Cora, however, was equally resolute in keeping Louise on the straight and narrow. Nonetheless, being a chaperone to the spirited girl was not Cora’s only goal. She had her own agenda when she accepted the position and chance to spend the summer in New York. First, she wanted to know more about her past and the woman who had abandoned her at a city orphanage. Just as important, she needed physical distance from her husband, Alan, to understand how her marriage was different from those of her friends.

The 1920s was a time of great technological and social change, and women were experiencing more freedoms than ever before. Laura Moriarty’s The Chaperone is a story of clashing generations and expectations. Cora had half an eye to the past, whereas Louise was all about embracing the future. The book also has a strong theme of secrets and the consequences of keeping them close. Although Louise would soon become world famous, in the end, it’s the older Cora who was more profoundly changed by that summer in the city.

Readers will be particularly struck with Moriarty’s ability to capture an era, making it easy to imagine just how difficult it would have been for Cora to make the transition from the quiet, proper Wichita to the bustling streets of New York during the exciting Roaring Twenties. The details of the city and of Louise Brooks’s life are exactly right, and Moriarty fleshed out the character of Cora Carlisle to focus on a number of issues, including the budding women’s movement, the meaning of family and the plight of orphans in the early 20th century.

The Chaperone, like the young Louise Brooks, is clearly destined to be a star.