Gregg Allman is engaged to marry again — for the first time! The Allman Brothers Band singer has chosen a 24-year-old bride, and despite six previous marriages, insists this is the first one that will count. 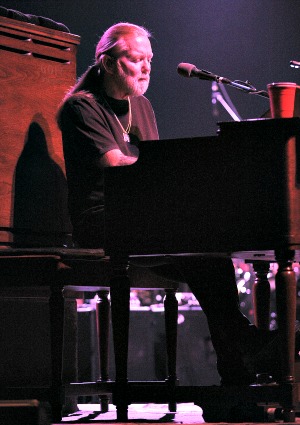 Gregg Allman’s math when it comes to marriages is a little fuzzy. The Allman Brothers Band singer, 64, is engaged to marry for the seventh time to a woman 40 years his junior!

When Gregg Allman walks down the aisle with his 24-year-old fiancée, records insist she will be the singer’s seventh wife. All facts and details aside, he doesn’t see it that way. Speaking during an interview on Piers Morgan Tonight, Greg Allman claimed his fiancée is not “wife number seven.”

“That’s not what she’s becoming,” the 64-year-old explained. “She’s becoming wife number one. I don’t have a wife. Haven’t had one for years.”

When questioned about why he’s willing to enter a marriage once again, the six-time divorcée said uncomfortably “this time I am really in love.” Those previous marriage, including one to world famous singer Cher? Well, Allman reasons he has only been in love twice in his life, though both were “one-sided” relationships.

Despite the possible diss in her direction, Cher still has love for Gregg Allman. The woman who gave birth to their son Elijah Blue in 1976 tweeted Thursday, “Gregory! loved him w/All my Heart! He was Tender, So Polite, A GREAT Talent & in my eyes Beautiful! Thought ‘I’ could him get off drugs! I Couldn’t.”

Check out Gregg Allman’s fiancee in this awkward video from Piers Morgan Tonight!

Do you think seventh time will be the charm for Gregg Allman?