Want to see Robert Pattinson’s you-know-what? Too bad, he’s not showing it. Find out what he told the director of his new film Cosmopolis when instructed to show the bottom of his “balls.” 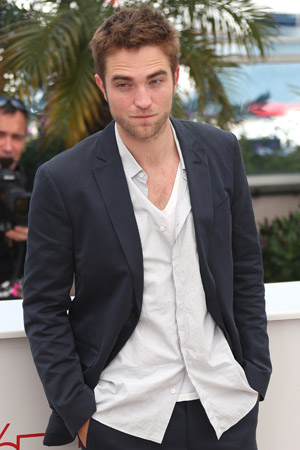 The script for Robert Pattinson’s new film, Cosmopolis, called for some nudity. So, we’ll see a naked RPatz on screen when it hits theatres, right? Nope! The actor revealed to Metro France that he straight up told the director to bugger off when it came to showing his, uh, balls.

“Five minutes before we filmed, David told me, ‘I want to see the bottom of your balls on the top of the frame,'” he said. “At the moment, I reminded myself that I would do anything for him. So I went back to see him and told him that wouldn’t happen.”

We’ll admit that his choice is surprising: We figured Pattinson would be ready to break out of the Twilight mold in a big way. Guess not.

The director was surprisingly okay with it.

“He took it really well,” Pattinson added of David Cronenberg. “At the start, it’s a very bizarre scene that you won’t see again in another movie, I promise.”

Critics at the Cannes Film Festival are torn on whether or not Pattinson is the best choice for the leading role in the film that follows a billionaire as he battles a series of weird events while traveling to get a haircut in Manhattan. Cronenberg isn’t worried about the critics, though: He knows that Edward Cullen is the best for the job.

“Yes I found him interesting in Twilight… I saw him in Little Ashes and Remember Me, and I am convinced that he could be my Eric Packer,” he told MTV News. “It is a heavy role, he appears in each scene and I do not think I’ve ever done a movie before where the actor is always on the screen. The choice of an actor is a matter of intuition, there are no rules or instructions.”

Pattinson has similarly nice things to say about his boss.

“Filming Cosmopolis with David changed something in me,” the 25-year-old actor told Metro France. “It gave me balls.”

Too bad you won’t show us those newly-acquired balls, Rob — we’d look, but only because it’s art. Honest.