Marvel’s giving the god of thunder a run for his money. The studio has found the perfect actor to play his latest foil in Thor 2. They’ve also made another villainous addition to Iron Man 3, to ruffle Tony Stark’s feathers. 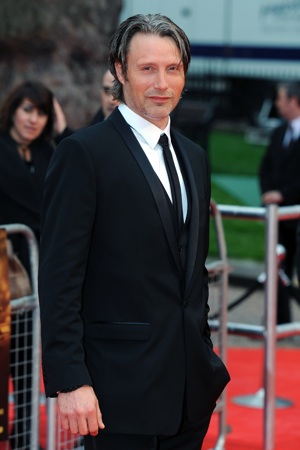 Marvel Studios has had a busy week. Thursday they unveiled not one, not two but three castings for next year’s Thor 2 and Iron Man 3.

Sometimes, the right stars can make or break a movie. And following the success of The Avengers, Marvel wants to hold onto their box office clout.

Chris Hemsworth‘s Thor will meet his match in Danish actor Mads Mikkelsen. Mikkelsen has been cast as the big bad in the superhero sequel. Unfortunately, the identity of his character is being kept under wraps.

If you’re a fan of Tom Hiddleston, who played the villain in Thor and The Avengers, don’t worry. He’ll be back! According to Variety, Hiddleston will “still have a big part as antagonist Loki.”

Thor 2 begins shooting later this summer and is scheduled to hit theaters Nov. 15, 2013.

As for Iron Man 3, they’ve also confirmed that Ashley Hamilton (son of George Hamilton) has joined the cast as a government cyborg. It’s a small role rooted in the original Iron Man comics. In the books, the character’s the pilot of an experimental armored suit dubbed Project: Firepower. And he eventually uses the device to attack the hero.

Jon Favreau confirms he will not be directing Iron Man 3 >>

Iron Man 1 and 2 director Jon Favreau is returning to the franchise — in front of the camera. Favreau is reprising his role as Happy Hogan, Tony Stark’s bodyguard/sidekick. Iron Man 3 began production Wednesday in North Carolina. The film is written and directed by Shane Black and opens nationwide May 3, 2013.