Jim Parsons’ gay reveal wasn’t made with much hoopla, yet one fellow star is pretty excited to hear the news. What do you think of Zach Braff’s Big Bang joke? 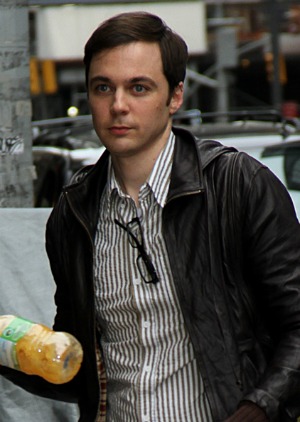 Jim Parsons, Big Bang Theory star extraordinaire, is gay. The man known to fawning fans as Sheldon Cooper quietly came out of the closet during a recent interview with The New York Times.

The Jim Parsons article notes simply, “Mr. Parsons is gay and in a 10-year relationship, and working with an ensemble again onstage was like nourishment, he said.”

That’s it, no word on who the actor’s long-term boyfriend is, nor further blurb about his personal life — but that doesn’t mean everyone else isn’t talking about it — including fellow actor Zach Braff!

Jim Parsons to make a big bang on Broadway >>

The former Scrubs star, who worked with Jim Parsons in the 2004 film Garden State, had this to say Wednesday night in reaction to the gay reveal:

“I have always LOVED Jim Parsons. Now I can finally Big Bang him.”

Joining right along, Braff’s followers shared their own two bits of hilarity:

Still, one tweet in particular about Jim Parsons’ coming out seems to have struck the loudest chord. @Beetommy‘s message, “In all honesty, I’m more shocked about Jim Parsons’ age than his sexuality,” has since been retweeted over a thousand times.

We have to agree — how can Jim Parsons be 39? Spill the age-defying secrets, please!

Are there wedding bells in Big Bang Theory‘s future? >>

What is your reaction to The Big Bang Theory star Jim Parsons’ gay reveal?