Pint-sized Jersey Shore star Snooki is a few months away from giving birth, but she already knows what she’s having: A boy! Read on to find out all the details on her upcoming baby guido. 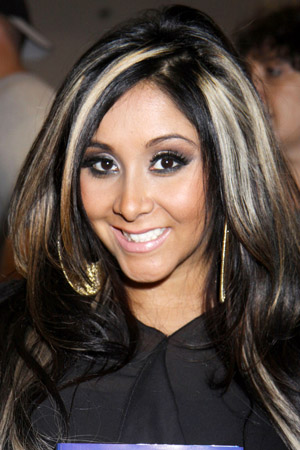 Earlier this month, Nicole “Snooki” Polizzi said she’d dress her child “like Pauly [D]” if she had a boy. Well, she better start investing in gel and baby spray tanner because that’s exactly what she’s having!

“Everyone said I was going to have a boy, and they were right!” she told InTouch Weekly in the new issue, admitting that she was disappointed at first. “I thought it was going to be a girl. I was hoping it would be, because all girls want girls. It’s still my baby, no matter what. I’m excited either way!”

Snooki gets fierce over baby >>

The pickle-loving reality star seems to be taking well to her new role as expectant mom: She doesn’t want to have sex as much (much to fiancé Jionni LaValle’s chagrin) and is done with her partying days. “I’m not going to party hard anymore, even after the baby is born… Being a mom changes you,” she said, stating the obvious.

We’re loving the new and improved Snooki! The Jersey Shore star even added to the magazine that she’s feeling good and taking care of herself. “I don’t even feel pregnant really,” she said. “I’m just tired but pretty much. It’s like I’m just growing a stomach.”

As for the name? They’re considering “normal names, not like when celebrities name their kids. It’s going to be a nice traditional Italian name” like Lorenzo or Jionni Jr.

Snooki may have a new outlook, but she’s not above shutting down the haters — especially on Twitter.

“#JerseyShore’s @Snooki is having a…” with “Demon? Spawn? Giraffe? Iguana? Rhino?” one user tweeted — and she noticed.

“Iguana!” she wrote back. Awesome attitude.