What do you mean you didn’t know Jillian Michaels is gay? As the celebrity trainer’s joyous baby news spreads, fans react to a particular fact that almost flew under the gossip radar.

Jillian Michaels‘ gay status seems to have gone unnoticed by many fans — until now. While her coming out has been decidedly subtle, there’s nothing left to question now that she and partner Heidi Rhoades are the parents of two!

On the heels of Jillian Michaels’ adoption of a daughter — and simultaneous arrival of a baby boy — some fans are wondering how they could have missed that the former Biggest Loser buff is gay.

Jillian Michaels is returning to the Biggest Loser >>

Other sources point to a 2005 interview with Larry King as Jillian Michaels’ coming out moment. The host said to her, “Jillian, before we talk to our two guys, what’s — do you have — I know the place that you and your partner own is Sky Sport and Spa.”

Without clarifying whether King meant romantic or business partner, the trainer replied simply, “Yes.” The facility is now owned by Jackie Warner, who was featured in the reality show Work Out.

In 2011 After Ellen alleged that while Jillian Michaels’ choice to keep her private life quiet may have been hers alone, NBC seemed determined to keep their trainers from speaking to the gay press. A post on the site reads in part, “The fitness guru doesn’t talk much about her personal life in the press, and has never spoken to the LGBT media. There is speculation about her relationship with another woman based on information on her public Facebook and Twitter accounts, but Michaels has never made an official statement about it.”

Despite the long-held speculation and near confirmations about Jillian Michaels’ sexuality, many fans were shocked to hear she and partner Heidi Rhoades are now the mothers of two. One Twitter user commented Wednesday, “I didn’t know Jillian Michaels is gay! She just adopted a 2yo and her partner had a baby. How awesome for them!!!”

Another commenter reacted by writing, “I [knew] Jillian was a lesbian (she had previously dated Vanessa Marcil) but had no idea that Heidi was even expecting! Jillian is top-notch when it comes to keeping secrets, which I think is fantastic. I’m thankful she let the world know when SHE was ready to and I couldn’t be happier for the entire family.” 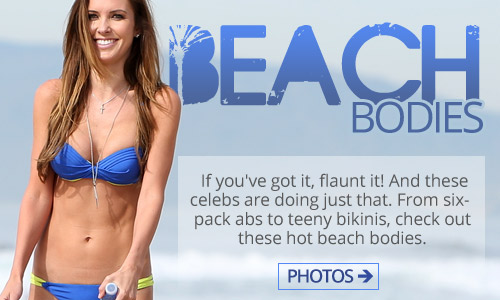