We figured that Donald Driver had a good chance to win Dancing with the Stars, but at least one person knew he’d win: His 8-year-old son. 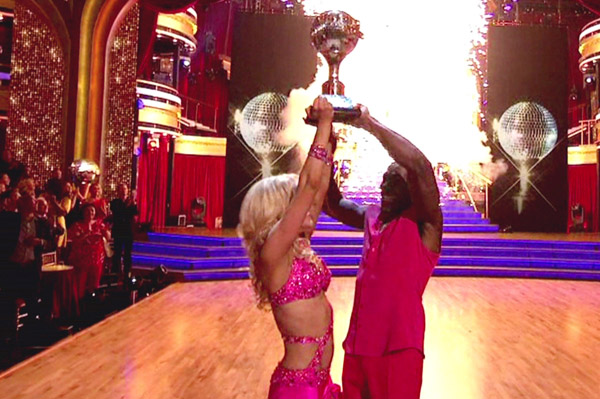 Donald Driver has a whole bunch of football accolades, so he doesn’t really need the Dancing with the Stars mirrorball trophy. He still wanted it so he could teach his children about not giving up.

“I was determined to win, and not get voted off first,” Driver joked to People after Tuesday’s finale. “When you win these things, you want to win for your family. I wanted to let my kids know and my family know that you can follow your dreams. Whatever your dreams are, follow them, because it’s truly special.”

However, he didn’t have to worry about winning over his three tiny tots — they were convinced he’d win from the start.

We were so happy,” son Christian, 8, told People. “We were just jumping up and down, the same thing that happened in the Super Bowl. He went in there and he practiced for 10 weeks, and he went through a lot of stuff. He didn’t get that much sleep, and he had to get up early in the morning and rehearse every single day. So he really deserved it.”

Do we really need Dancing with the Stars: All Stars? >>

How adorable! The Green Bay Packers wide receiver isn’t taking all of the credit for the win, though.

Driver added that he’ll still be friends with his blonde dance pro now that their days of 12-plus hour workouts are over.

Workout with Kym Johnson of Dancing with the Stars >>

“We’ll be staying in touch. She’s going to come out to my charity at the end of June. We won’t be strangers!” he told The Los Angeles Times on Wednesday. As for that dance off with fellow Dancing winner — and NFL star — Hines Ward: Who would win?

“That’s tough to call! We’ll have to make it happen and find out!”

More importantly, we’re glad that NFL stars continually take home the top prize on DWTS: It shows kids that athletes can play football like a boss and dance like a swan.

Were you happy that Donald Driver won Dancing with the Stars?