Kate Gosselin’s eight kids are clamoring to get back on reality television — or so she says. The former Kate Plus 8 star is considering going back to the small screen to appease the kids, as well as fans, as she claims they just can’t get enough Gosselin. 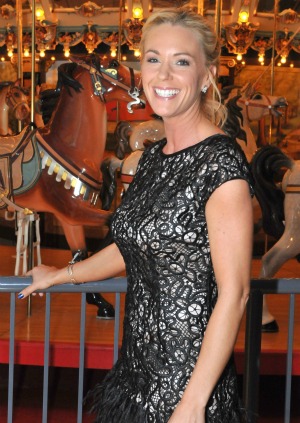 We may not have yet seen the last of Kate Gosselin‘s reality show days. The former TLC star insists fans are chomping at the bit to see her brood back on television, and the kids miss the cameras too!

“We’re doing awesome,” Kate Gosselin told Ann Curry during a recent Today Show visit. “The kids are doing great in school. Everyone is excelling at school, across the board. It’s amazing.”

Reality TV moms: The good, the bad, the controversial >>

“They really, honestly miss filming,” the coupon blogger went on to say of her eight children. “They recently have been saying, ‘When are we going to go here or there?’ They miss the crew. So, with our TLC contract now over, we’re hoping to move forward and do more fun projects.”

However, should cameras return to the Gosselin family, there may not be as much drama to film as in years past. “I can honestly say it’s more peaceful than it’s ever been,” the 37-year-old said of her relationship with ex-husband Jon Gosselin. “I feel that a really big weight has been lifted off my shoulders.”

Still, the mother of twins and septuplets is making do by appearing on various television chat shows and entertainment news channels. Gearing up for an average day she advised Twitter followers, “Good morning everyone! Make today the best day possible! Add some motivation, prioritization, patience and lotsa coffee 2 make that happen! :)”

Here’s your chance to be heard: Do you want to see another Kate Gosselin reality show made?