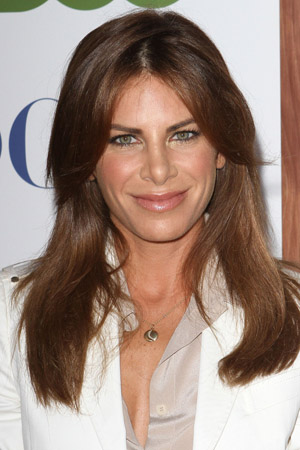 How is having two babies in one week even possible for a fitness guru who was obviously not pregnant with twins? After a grueling adoption process, the moon and stars aligned and the ripped Biggest Loser trainer Jillian Michaels was able to bring home her adorable 2-year-old Haitian daughter, Lukensia. The adoption process was finalized the same week that Jillian Michaels welcomed another baby into her family, son Phoenix who was born to Michaels’ partner, Heidi Rhoades.
“We’re swimming in babies over here,” she gushed to People in the new issue.
“I don’t even answer email. I don’t have time to care about anything else,” she added to the magazine. “I want to be really present and enjoy all the nuances of their growth and development. I don’t want to rush any of it.”

No word on what happened to Michaels’ pending adoption from the Democratic Republic of Congo. The television star told US Weekly last fall that she had completed her adoption dossier for the country and was just waiting.

“My dossier, which is your paperwork portfolio, is in to the Democratic Republic of the Congo. So the paperwork is done, and now it’s just a waiting game. It could be six months, twelve months; it could be two years. Or, it could be tomorrow!” she said at the time.

Maybe she’ll be a mom of three soon? We think she’ll welcome it: There was a day that The Biggest Loser trainer thought she might not ever have children. She had been quoted as saying she could never put her body through a pregnancy, but she later revealed to Redbook magazine that she has Polycystic Ovarian Syndrome, which makes it difficult to have children.

“I make an effort to be so transparent — I say, ‘Live in your truth, that’s the way to happiness,'” Michaels said. But in this case, she held back, and regrets it.
“I thought if I talked about my personal limitations, people would say, ‘How healthy could she be?’ This was my weakness and my bad,” Michaels added. “I learned a hard lesson about feeling ashamed: Just be real. I’m human.”

The 38-year-old fitness guru is now shouting her jubilance from the rooftops — or, in today’s world — through social media. She posted on Facebook, “I am really happy to finally share with you that I have brought my daughter home AND I have a newborn son… Thanks for sharing this long journey with me. I am so grateful.”

Do you think Jillian Michaels will make a good mom?