Dog the Bounty Hunter is no more. It had a good run, but A&E has canceled the action-packed reality series. Duane “Dog” Chapman and his family will have to find another way to get their TV kicks. 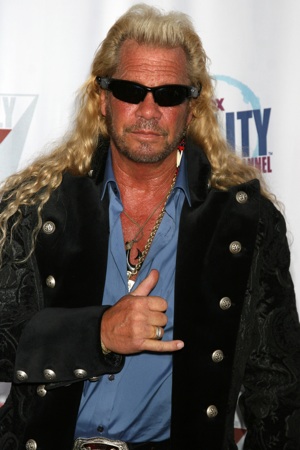 Every dog has its day and it’s finally come for Duane Chapman. The star of the A&E reality series, Dog the Bounty Hunter is out of a job. After eight seasons of culprits and controversy, the cable network has canceled his show.

According to The NY Daily News, A&E officially pulled Bounty Hunter’s plug on Monday. The series followed Chapman and his family-run bounty hunter business, as they tracked down fugitives from justice.

No explanation has been given for the cancellation. But some say the network and the star were butting heads over creative differences. And rather than deal with the conflict, they opted to axe the show altogether.

During its run, the Chapmans were involved in just as much legal trouble as their targets. In 2006, Duane and one of his employees “were arrested on charges of illegal detention in the capture of Max Factor heir Andrew Luster in Mexico.”

Also, one of Duane’s former collars, Hoang Minh Phung Nguyen, sued the Chapmans after being accused and arrested on attempted murder. The charges were dropped due to lack of evidence, but after appearing on the show, Nguyen was was fired from his job and forced to relocate.

Dog the Bounty Hunter’s most notorious off-camera incidents involve his children. Last year, his sons Duane II and Leland left the show and cut all contact with the family. While Chapman’s daughter Lyssa was recently arrested for property damage and assaulting a police officer.

Are you sad to see Dog go?