Harry helped an old friend, Lane tried to pay off a debt and Don got his groove back on Sunday’s Mad Men. 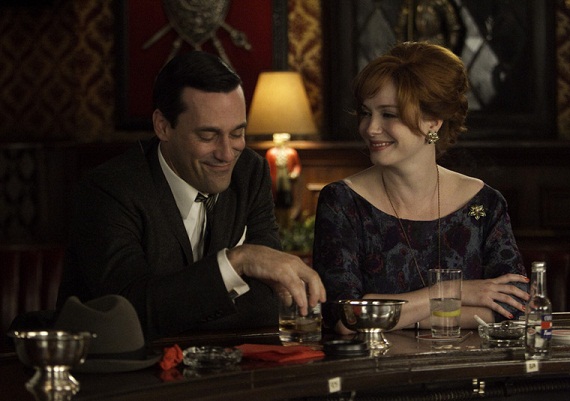 For much of this season of Mad Men, Don Draper has carried all the markings of a changed man: He’s mellowed, he’s aged, he’s domesticated, he’s complacent and he’s thoroughly confused by the shifting tides of the ’60s. For the new Don Draper, there has been no more sleeping around. No more long nights at the office (or full workdays at all!). No more lies. And, perhaps consequently, no more innovation.

However it may have affected him, Don’s marriage to Megan has proven to be his most secure and nourishing relationship, thus far (excluding, perhaps, the secret platonic love he shared with the late Anna Draper). It has made his life less exciting and less unpredictable, to be sure, but it has also made it more enriched and more grounded in reality. And less lonely.

But in the wake of Megan’s rejection of a promising advertising career, a chasm is now quietly opening between Mr. and Mrs. Draper that may be imperceptible, even to Don himself. As supportive as Don seemed of Megan in “Lady Lazarus,” this week’s “Christmas Waltz” hinted at listlessness and dissatisfaction, and it even saw him sniping at Megan about the decision she had made to wholly reject Sterling, Cooper, Draper, Pryce (SCDP). After attending a stage play populated by some of Megan’s friends, Don couldn’t help but vent his frustration that even Megan’s artsy, Bohemian pals poke fun at his life’s work — the very work that provides Megan a secure foundation on which to build her own (perhaps unattainable) dreams.

And so, gradually, Don responded to his gnawing dissatisfaction with Megan and with himself by tightening his grip on what, arguably, has been his one, truest love: His firm. After all, Megan might be outside of Don’s frame of control and understanding, and her friends and aspirations might always be incomprehensible, but Don’s work — now that’s something he can still steer like a pro. That, and a really sweet Jaguar. But we’ll get to that later.

By the end of “Christmas Waltz,” Don had rededicated himself to the ad business and had delivered a rousing speech to his troops unlike anything we’d seen in awhile. This, it seems, is the Don Draper of old, somehow born anew. But what does this unexpected rebirth mean for Megan? Has Don changed enough since the beginning of this series to be both a strong ad man and a strong husband at the same time? Will Megan force him to choose?

The recalibration of Don’s focus this week, from his troubled domestic life to the workplace life he’d shoved aside for so much of the season, was the strongest and most interesting aspect of “Christmas Waltz” — but it was far too spare and was largely buried by less interesting storylines that centered on far less interesting characters.

One of those less interesting characters was Paul Kinsey, a casualty of the firm’s overhaul at the end of season three, who re-emerged this week as a devout member of the Hare Krishna movement and a thoroughly lost soul. Paul reached out to Harry to set up a lunch and to invite Harry to partake in some good, old-fashioned Krishna praise, but his end game was to give his former co-worker a speculative script of Star Trek to pass along to NBC.

Paul’s dream, he told Harry, was to leave the Hare Krishna (with one of its female worshippers) and enjoy the charmed life of being a television writer. Unfortunately, Paul’s script sucked, Paul’s girlfriend had no intention of leaving her fellow believers (and, inexplicably, had sex with Harry to keep him away from Paul) and Harry did the only decent thing he could think to do: He told Paul the Star Trek script was wonderful and slipped him $500 to start a new life in Los Angeles.

Aside from its tenuous connection to the self-actualization theme that’s hung over the series as a whole, this Harry/Paul stuff seemed an odd, unnecessary subplot for Mad Men, especially as it moved forward so few of the characters we’ve come to know and care about.

Only slightly better than that storyline was Lane’s dilemma of the week: Outsmarting the taxman (a thread that was about as dramatically compelling as anyone would expect). At the start of the hour, Lane learned he had only two days to come up with $8,000 to pay off a debt to his home country. Scrambling for a solution, he managed to get the company’s credit extended, then passed the extra money off as a small windfall for SCDP. Christmas bonuses for everyone! Huzzah!

But not so fast, said Pete, Don and the others. Just as Lane was ready to put his plan into motion, some unexpected trouble arose with Mohawk, one of the firm’s biggest clients, and a workers’ strike at the airline killed Mr. Pryce’s Christmas bonus ploy for all senior and junior partners. Everyone else got checks, though—and while the rest of the staff applauded the generosity of their superiors, Lane secretly sweated the knowledge that his tax problem is yet to be solved.

With the Mohawk relationship a big mess, SCDP is poised to bet a significant chunk of its future on Jaguar, thanks to a relationship cultivated by the compulsively self-congratulatory Pete Campbell. Initially, Don and Burt were unimpressed by Jaguar and by Pete’s praise of his own skills (“No one has given me the reaction I desire from this blessed event,” Pete complained), but Don’s rising ad man mojo finally got him behind the wheel of a Jaguar and back at the helm of the project. By hour’s end, Don had assured the entire crew of SCDP, “When we land Jaguar, the world will know we’ve arrived.”

Significant credit for Don’s transformation in “Christmas Waltz” can probably be directed towards Joan, who has been criminally underused this season but still has command of every scene she’s in. This week, after having been served divorce papers in the office, she flew into a rage and only Don and a couple of stiff drinks could calm her down. Their friendship and shared sadness — all flirtatious under the hazy mist of alcohol and Christmas music — was explored in a terrific scene that helped to lift an otherwise scattershot hour. After some one-on-one time with Joan, it’s no wonder Don returned to the office looking like he could conquer the world. I mean, who wouldn’t?