The original American Idol is in a relationship. But what if you’ve made a career out of empowering songs and tearful ballads? It’s a problem, says Kelly Clarkson. 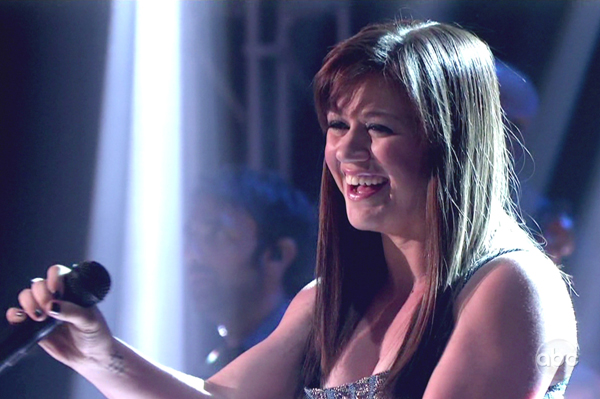 What’s the key to a successful music career? Besides a celebrity spot in ABC’s summer singing competition Duets and an amazing set of pipes that won over the nation’s hearts in the very first season of American Idol, it sounds like Kelly Clarkson needs one more thing to hit the high notes and rise to the top of the charts — a broken heart.

And thanks to Nashville-based talent manager Brandon Blackstock, that’s one thing she definitely doesn’t have right now.

“It is killing me,” said the singer to People . “It is ruining my creativity… it has been really difficult.”

Kelly Clarkson and Lionel Richie to sing Duets all summer >>

The two have been dating since late 2011, but Kelly only publicly announced her relationship with Reba McEntire‘s stepson this past March. And though Clarkson is currently conquering the radio waves with “Stronger” and “Dark Side,” she is having trouble sticking to this particularly somber and beaten tone in her lyrics.

“I’m trying to write a tough song and it is coming out like butterflies and rainbows,” she admitted. “I’m writing all this happy [stuff].”

However, she’s happy to be putting away the darker days of her past for her new priorities. “People used to ask, ‘Why are you single?’ and I’d say, ‘It is not in my schedule.’ I’m in a relationship right now and I have time for it. I never used to.”

Plus, she doesn’t mind the extra work as she develops new material.

“People are going to be, like, ‘What the hell happened to you?'” said the happy singer. “I love it. It’s an awesome problem to have.”