From the movie The Vow starring Rachel McAdams to the slew of recent women’s fiction, women suffering from memory loss seems to be a popular topic this year in film and literature. Liane Moriarty’s novel What Alice Forgot takes this familiar plot line and makes it fresh and new. We couldn’t get enough of Alice and stayed up late into the night to discover whether she would find the happiness she so wanted.

When 29-year-old Alice Love wakes up on the floor of the gym after falling off her bicycle during spin class, she thinks that, despite a nasty bump on her head, she’s just fine. But upon her arrival at 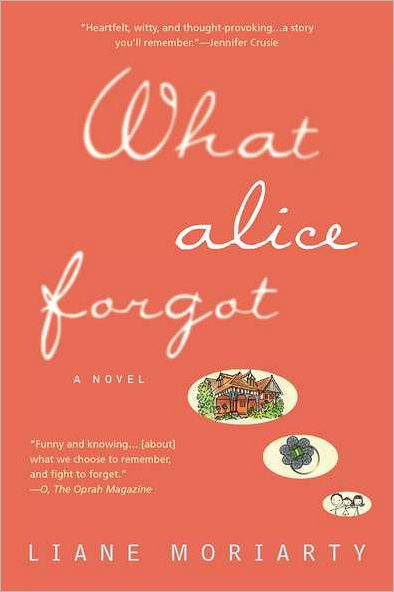 the hospital, Alice realizes that things aren’t fine at all. She isn’t 29, she’s actually 39! Somehow, that bump on the head cost her 10 years of her life, 10 years of memories. She’s not pregnant with her first child, she’s the mother of three kids she doesn’t know. And her beloved husband Nick? They’re barely speaking and in the middle of a horribly bitter divorce.

While the memory loss has Alice floundering and grasping to understand what her life has become, it’s her 39-year-old self that really surprises her. Gone is the free-spirited, happy woman she used to be. As Alice learns more about the nasty woman she’s become, she can’t help but wonder what happened to her. How did the fun-loving, relaxed 29-year-old woman she feels like she is now become the old, crusty, soon-to-be-divorcee that she apparently is? And how did she fall out of love with Nick, the man she thought she’d be with for the rest of her life? Alice must come to terms with the fact that the man who was once at the center of her life no longer wants anything to do with her. What’s more, she must be the mother to three children she can’t remember giving birth to, much less mothering.

But in some ways, Alice is lucky — she has seen what her life has become, but because she can’t remember how she arrived there, she has a second chance to turn things around. As she reaches out to Nick and tries to convince him that she is a different person, new and improved, she must also discover why she cut off ties with her sister and her best friend. Who is this new Alice, and why is she the way she is? Alice must do everything in her power to return her life to what it should be, and in the process, she realizes that regaining her memories might be more difficult than she’d thought.