Here we go again: Dancing with the Stars is set to award another mirror ball trophy tonight. Sure, we like dancing, but we totally don’t give a rip who wins. 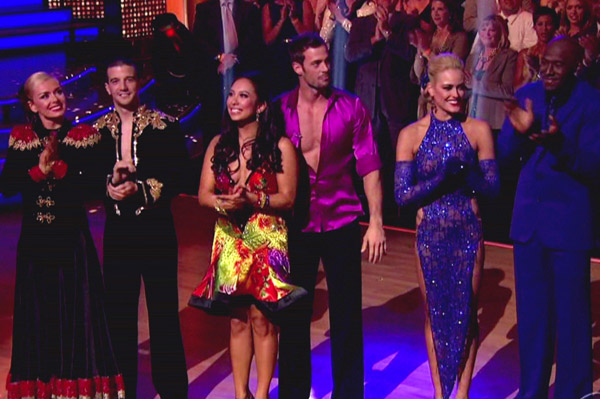 It’s all coming down to tonight: Three finalists will compete to win the coveted mirror ball trophy on Dancing with the Stars. Are you as bored reading that as we are writing it? You’re not the only one: DWTS has officially jumped the shark with this season’s finalists.

Let’s see, who do we have competing: (Boring) Cuban hottie William Levy, (boring) Welsh singer Katherine Jenkins and (not-as-boring-but-still-boring) football player Donald Driver. We absolutely do not care who wins — not one of them had a huge fan base before the show.

So, who should win? Elmo, for all we care (did we mention we don’t care who wins?) However, ask the contestants who should take the top spot and Driver will pipe up right away. The NFL player makes no secret that he wants the trophy — for his kids, of course.

Do we really need Dancing With the Stars: All Stars? >>

“My kids can’t wait to take it home,” the Green Bay Packers star told The Huffington Post before Monday night’s last dance. “They just really want to hold it. I tell them that we’re bringing it home to Titletown.”

He received a perfect score on Monday night’s show, so things are looking good for him.

“I felt great. I feel like I’ve reached the goal that we tried to reach for nine weeks. It took week 10 to get a 10, and I’m okay with that,” he told People after the show Monday night. “They say freestyle normally wins this competition. We nailed our freestyle. And we felt like we had the best freestyle out of anybody that was up in this competition.”

Jaleel White “a buck sixty-nine” thanks to DWTS diet >>

Even past winner Jennifer Grey thinks Driver is a shoe-in for the win.

“My bet is Donald Driver and Peta Murgatroyd,” the actress told People Tuesday afternoon. “I think it was the tightest final I’ve ever seen. I think that Katherine Jenkins is incredible. I think she’s been amazing through the whole season, as has William Levy. But I’m feelin’ Donald.”

We’d rather feel Levy, but that’s a different article.

Anyway. Dancing With the Stars: boring. Just wake us up when it’s over, okay?