Justin Bieber has been remarkably quiet about his relationship with Selena Gomez, save for a cryptic tweet sent last week. Does this mean the superstar teen couple is dunzo? 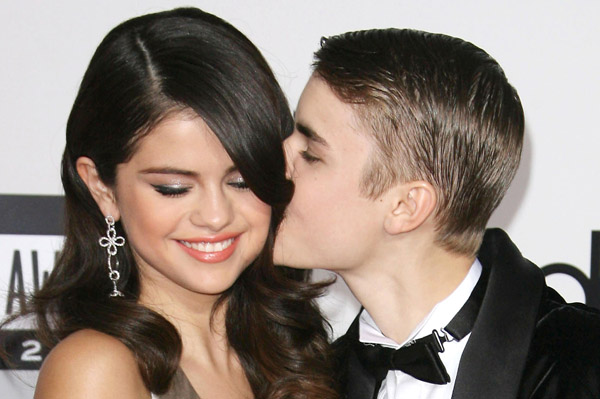 Justin Bieber thanked pretty much everyone when he accepted his award Sunday at the 2012 Billboard Music Awards, but it’s who he didn’t thank that has people talking. The Biebs took the stage and forgot (intentionally or not) to thank girlfriend Selena Gomez.

Uh-oh — trouble in paradise? Maybe, especially since Bieber allegedly sent a cryptic tweet assumed to be about his gal pal of a year.

“Thank you for the time i had with you but i have to move on,” the tweet read before it was deleted, according to Perez Hilton. However, Bieber’s reps said that it was a “fake tweet — never on his account or from him.” We think his rep is telling the truth, especially since all 75 billion of Bieber’s Twitter followers would have noticed the tweet even if it was deleted right away.

It still doesn’t explain why Gomez was missing from Bieber’s side at the awards show. Actually, she has a pretty good excuse: The pretty actress is currently filming The Getaway in western Bulgaria with Ethan Hawke, a remake of the 1972 Steve McQueen and Ali MacGraw classic.

The 20-year-old also experienced the earthquake that rocked the country and northern Italy. Fans were concerned and started a #PrayforSelena trending topic on Twitter.

“Thank you for all of your concerns!! Earthquake was scary but thankfully everyone is ok. Praying for Italy,” Gomez tweeted Tuesday morning.

As for her crush, Gomez said Tuesday that “his eyes were staring deep into mine. I could feel my cheeks getting flushed.” She wasn’t talking about Bieber — it was all about Carl Blue, her painter in Fifty Shades of Blue, a Funny or Die parody that took over the web on Tuesday.

Sadly, it wasn’t meant to be.

“He had changed me,” she lamented. “I’ll never be the same.

What do you think: Are Selena Gomez and Justin Bieber still together?