Miley Cyrus’ recent outspoken behavior seems oddly familiar. Why? Because we’ve seen it before in other former teen queens like Britney Spears and Lindsay Lohan. Is she going down the same worn path? 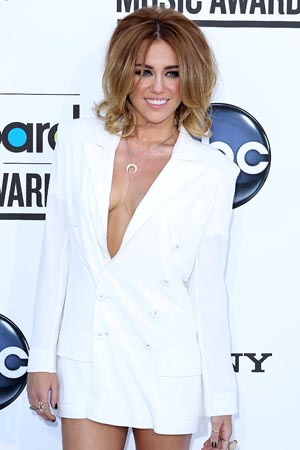 Miley Cyrus is doing everything she can to remind us that she’s no longer Hannah Montana: She’s showing off a lot of sideboob in public, talks about sex incessantly and blows off performances.

The LOL actress appeared on The Conversation With Amanda de Cadenet show last week to talk about — what else? — sex.

“Girls who base how much they’re worth on the sexual favors they can do for somebody, that makes me really sad,” Cyrus said. “Because sex is actually really beautiful.”

“It’s the only way that we create and it’s the only way that the world keeps going. It’s ignorant to not talk to your kids about it or make it seem like it’s not as cool or magical as it actually is. If [kids] have a TV, they know what sex is. Everyone knows, so educate them,” she added. “Let them know that they wouldn’t be here without it, and it is a beautiful thing, and it is magic, and it is when you connect with somebody and it isn’t how much you’re worth. Your worth isn’t based on that. Your worth is based on how you feel about yourself.”

Good message, right? Except Cyrus uses sex to get attention all. the. time. She appeared at the Billboard Music Awards on Sunday night wearing only a blazer. Well, we take that back: She was wearing shorts underneath, but it was hard to tell. She was also spotted prancing around a Hollywood parking lot on Monday wearing a cut-off T-shirt and no bra.

Basically, Cyrus teaching girls about sex is as laughable as Lindsay Lohan giving advice on punctuality. And she’s not breaking any new ground here: Her recent antics are stolen directly from the playbooks of Lohan and Britney Spears. All that’s missing is the crotch shot.

Oh, and she was supposed to appear on the finale of American Idol to duet with finalist Hollie Cavanaugh, but she put the kibosh on that because she didn’t have “time.” What else does she have going on right now? Pilates, that’s pretty much it. The natural next step in her downward spiral is rehab. We hope we’re not right, but we’ve seen this time and time again.

Do you think Miley Cyrus is on the right track, or has she taken the wrong path since Hannah Montana?