Looks like trouble isn’t hovering too far from Lindsay Lohan. The on-and-off-again actress is reportedly already making a fuss about the casting on the Elizabeth Taylor Lifetime biopic. Find out what’s got her freckles all flared up. 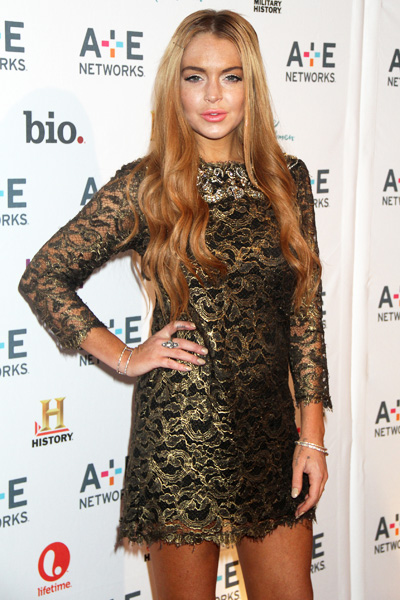 Not surprisingly, Lindsay Lohan has found herself in a pout. The troubled actress is upset about the potential actors that could be portraying Richard Burton in the upcoming Elizabeth Taylor Lifetime biopic.

According to RadarOnline, Lindsay wants to fly to London to pick out her co-star herself. “Lindsay declared that none of the actors were the right fit and that she wanted to go to London to look for a possible Burton actor there,” RadarOnline was told by a production assistant.

The insider goes on to say that Lindsay’s being a total nightmare (already) about who should play Burton. The runners-up for the Richard Burton spot are Gossip Girl‘s Matthew Settle, Sean Maguire and CSI’s Craig Robert.

“[Lindsay] believes Matthew Settle is too old to play the role, and she wants a major A-list star to be her co-star. However, her salary for the role took up a major portion of the budget, and the Burton gig will likely only pay $200k, max,” the production insider went on to tell RadarOnline.

Looks like Lindsay is already acting like a self-righteous diva. Well, duh, Lifetime. What did you expect?

This isn’t the first time Lindsay has been called a “total nightmare,” she made the cast of Glee see her true colors, as well as the cast of Saturday Night Live. She may have a time management problem, let’s just say.

Who do you think should play Richard Burton’s role opposite Lindsay Lohan? Check out our picks below:

George Clooney: Ok, we may be aiming a little high — no, we are definitely aiming way too high — but we feel that Lindsay Lohan needs a father figure. Though Clooney is not a father, we feel like he would whip her into shape very fast. He has a warm, yet respectable air to him. Not too mention, he has the intense stare of Richard Burton’s.

Ewan McGregor: His soft voice and sweet looks might melt Lohan’s heart, causing her to put all her effort into her work. We think he could be a positive influence on the red-headed actress.

Ed Westwick: Oh, yes. Gossip Girl‘s Ed Westwick would be ideal for Richard Burton. He’s British, after all. Lindsay wouldn’t have to go too far to get him, as he’s based in New York City.

Which actor do you think should play Richard Burton?