Howard Stern might be a huge jerk on his SiriusXM Satellite Radio show, but he’s nothing but a softie when it comes to kids. Find out why he broke down on Monday night’s episode of America’s Got Talent. 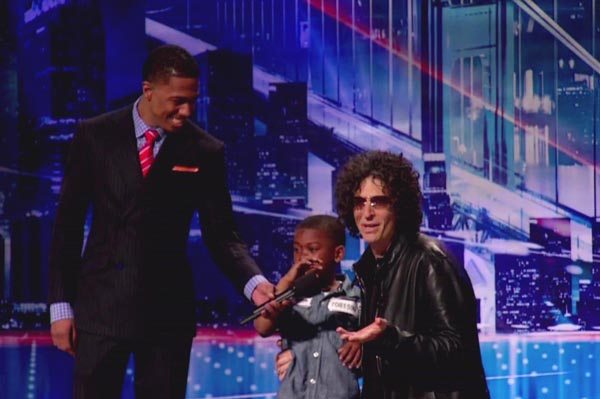 Who knew that Howard Stern was such a huge softie? The radio shock jock proudly declared last week that he loved pushing the dreaded buzzer on America’s Got Talent, but that novelty wore out quickly. The quick change of heart came courtesy of a 7-year-old rapper.

The adorable tyke, nicknamed Mir Money, appeared on Monday night’s AGT and quickly got the “X” from Stern before co-judge Sharon Osbourne followed suit. The reaction incited raucous boos from the audience.

“You’re a very nice young man and you know that. No one likes hitting the X on a 7-year-old. You’re very brave to get up there at 7 years old,” Stern told the small rapper before he started to cry. This obviously broke Stern’s heart and he took the stage.

“I’ll fix everything,” he said, giving the boy a huge hug. “I’m so sorry… You’re a terrific young man. You are so brave.”

The tearful moment had a huge impact on Stern. “This job is too rough for me. I don’t really want to do it anymore,” he said. “I don’t want to make you cry,” he continued to Mir Money. “I’ve met many of great rappers… none of them are quite as great as you.”

Host Nick Cannon then carried the boy off the stage while Stern turned to the cameras.

Stern’s empathy for the child was endearing, but we’re not surprised he’s so emotional — we were never convinced that he was coldhearted.

Now, former judge Piers Morgan? He would have buzzed the boy and not given it a second thought. It’s better this way, though: We’d rather have someone with a heart at the judges’ table over someone with ice in his veins.

Do you like Howard Stern on America’s Got Talent?