Jane Lynch gave a poignant — and hilarious — speech this weekend during Smith College’s graduation. Check it out! 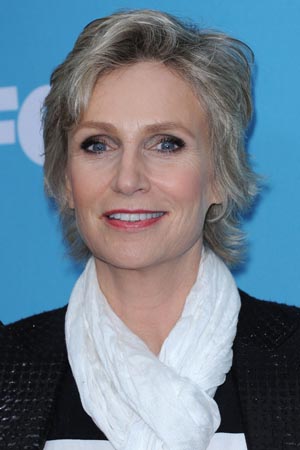 How would she know that? Well, she lives with one: Her wife, Lara Embry, graduated from the Massachusetts college.

However, she wasn’t just there to joke around: Lynch had plenty of advice to give the grads.

“Remember that Smith woman entitlement I spoke of earlier? I’m counting on yours to ferociously guard the women’s health care rights our sisters won for us years ago,” she said, adding that “plans are for wusses. You are obviously good planners or you wouldn’t be here. Stop it now! Don’t deprive yourself of the exciting journey your life can be when you relinquish the need to have goals and a blueprint.”

Lynch closed by thanking Smith for her honorary degree.

“Today I become a Smithie. That same piece of paper that my wife and all of you toiled for years to get, I now get for a handshake,” she joked. “I am so proud to be one of you.”

The Glee star is just one of many celebrities tasked with delivering the graduation speeches at colleges around the country and world. It’s hard to pick favorites, but here are a few that we loved.

The West Wing and The Social Network creator Alan Sorkin got honest — really honest — when he addressed the Syracuse University graduating class in early May 2012.

“My big fear was that I wasn’t going to be able to write without it,” he confessed of the drug. “Last year I celebrated my 11-year anniversary of not using coke. … In that 11 years, I’ve written three television series, three movies, a Broadway play, won the Academy Award and taught my daughter all the lyrics to Pirates of Penzance.”

Moral? You can do anything you set your mind to.

New Orleans native Ellen DeGeneres returns to the city to give the commencement address at Tulane University. Of course, she brought her comedic chops.

“By the time I was your age, I really thought I knew who I was, but I had no idea. Like for example. … I was dating men. So what I’m saying is, when you’re older, most of you will be gay,” she joked.

Graduates can stand to learn a thing or two from Bono: He’s now the richest rock star in the world. However, he was more concerned with bestowing a message of service in his speech to Penn’s 2004 graduating class.

“What are you willing to spend. … your sweat equity in pursuing outside of the walls of the University of Pennsylvania? My point is that the world is more malleable than you think,” Bono said.

“I, a cable television talk show host, have been chosen to stand here and impart wisdom. I pray I never witness a more damning example of what is wrong with America today,” he said to laughs.

Which is your favorite celebrity college graduation speech?