There is no shame in John Mayer’s Bachelor-loving game. The singer has been gabbing about reality television and his newfound maturity while out promoting his new Born and Raised album. 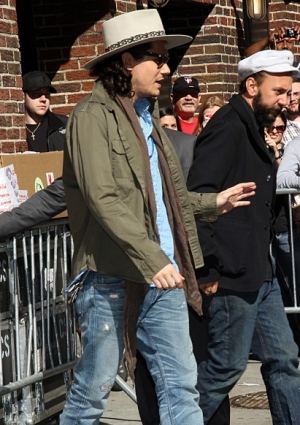 John Mayer’s new Born and Raised album, called a “country-fried introspective” by MTV, is due out Tuesday. Fans looking forward to a more mature Mayer have not only age to thank for evolving the musician’s sensitive side, but a little reality show called The Bachelor.

Admitting he started watching during “the Brad Womack year,” 34-year-old John Mayer finds no shame in telling the press he’s a total sucker for the rose ceremony and scenes of thoughtful staring out at the horizon.

“I don’t even feel like it’s my fault for liking it,” the singer explained. “It’s not a guilty pleasure. It’s designed to be a pleasure.”

“It’s like a producer’s game,” he continued, marveling about how the show is put together. “I wouldn’t be as excited to meet a cast member as I’d be to meet the guy who cuts that show. They have to ask someone like Ben [Flajnik] like, ‘Okay, Ben, we need you to walk out on the balcony without a shirt and just think.'”

However, don’t get your hopes up that the single singer known for putting his foot in his mouth during interviews will actually be the next Bachelor. “It’s one of those things where I would waste their time taking a meeting, just so I could hear more about it,” Mayer said of the possibility. “Ultimately I’d say no. But I would just have to take the meeting.”
Despite spending his evenings watching reality television, the Born and Raised singer promises his latest album is filled with personal growth and evolving musical talent.

“If you’re lucky, you get to make giant evolutionary steps from your first record, so I was able to do that,” he told MTV. “And you guys, I think, you’re able to come along with that step and be psyched about that evolution and I’m excited to even go further now and start coming up with melodies you haven’t heard yet.”